I had a strange realization the moment I finished season one of this reimagining of the 80s videogame antagonist: I’ve been enjoying kids’ programming a lot more than adults’ lately. Whilst I dutifully slog through the Marvel Netflix shows, dreading each instalment (‘Jessica Jones‘ excluded), both Carmen Sandiego and ‘She-Ra and the Princesses of Power’ have been excellent. 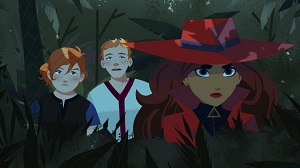 The animation here looks stunning. I am completely in love with the visual style. The sharp-edged characters remind me of ‘Batman: the Animated Series’, whilst the backgrounds have a wonderful 60s vibe. The action is perfectly framed, and it’s clear that the animators have a good sense of how to both mimic live action features and take advantage of all that 2D animation has to offer.

The story is a mix of genres, including heist caper, James Bond-type spy movie and even a dash of Indiana Jones. Carmen herself, voiced by Gina Rodriguez, is a great lead, whilst Finn Wolfhard continues his ascent as the biggest star to emerge from ‘Stranger Things’, portraying whiz kid computer hacker, Player. But the MVP is truly Rafael Petardi as the clueless policeman on Carmen’s trail, Chase Devineaux. His delivery constantly gets the biggest laughs, even if the punchlines aren’t that clever.

Carmen has made the switch from baddie to goodie – strange when you consider we spent the original videogames trying to catch her, rather than playing as her – but the really weird part is how similar her origin story is to She-Ra’s.

I love the educational diversions here, precisely because they are so obviously shoehorned in. The basic geography lessons are kind of charming. It is frustrating, however, to watch the episode set in Australia. The accents are woeful, and what’s more they decided to go with a plot concerning a rocket launch near Uluru – a strange choice, considering there haven’t been any rocket launches in Australia since 1970. If I fancy some mental acrobatics, I could try to convince myself that the show is actually set in the 1960s (but a 1960s with internet and smartphones and etc. etc.)

The only other disappointment is that the plot features some ‘surprises’ that we adults can see coming from a long way off. This didn’t annoy me too much, since the narrative construction and characterisation is tight enough that said twists are quite cleverly plotted – everything makes sense, rather than having abrupt 180 twists for the sake of them.

As far as rebooting 80s IPs so that grown-up kids of the era can watch the shows with their kids, this cartoon is surprisingly lacking in cynicism. Where ‘Stranger Things’ annoys me with its habit of reassuring late gen Xers and Millennials that yes, their era was GOAT, Carmen Sandiego is a solid story, well-told. Bring on season 2.

Carmen Sandiego is available to stream now on Netflix.

←How to Train Your Dragon: The Hidden World Cardcaptor Sakura: Clear Card Part 1→