‘Straight to Netflix’ doesn’t quite have the pejorative connotations that ‘straight to DVD’ once held, with some quality films starting their runs first on that medium. Nonetheless, it’s hard to escape the idea that perhaps this latest of Michael Bay’s explosionaramas is on Netflix as it’s simply not worthy of a cinema release. 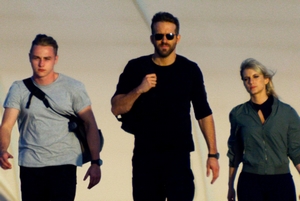 6 Underground’s marketing is based primarily on the presence of Ryan Reynolds, and the incomprehensible trailer is matched only by the incoherence of the film. This film is a mess. It’s disheartening when one watches 127 minutes of a movie and then wonders what the f*ck they just sat through.

Reynolds stars as One, a billionaire who fakes his death to become the leader of a group of anonymous vigilantes operating on a global scale. Their mission is to take down the despotic leader of the fictional country Turgistan, but first they’ll have to complete a rescue mission and assassinate some generals.

Reynolds first came to my attention playing a pre-med student in the TV show Two Guys, a Girl and a Pizza Place, and it was clear from that moment that he could be a big star. After appearing in a series of college frat-boy movies, he has reinvented himself as an action man with a comedic edge in movies like Deadpool. In my opinion, Reynolds is one of the most watchable of all of Hollywood’s leading men. He oozes charm and has used it to achieve tremendous success.

Even Reynolds’ charm can’t save 6 Underground.

Bay deliberately obscures the narrative by employing a non-linear structure that confuses rather than enhancing the flow. Sometimes starting with a flashback or flashforward makes sense when considering the dramatic tension that can build, but in 6 Underground there seems to be no purpose other than to bewilder the viewer. 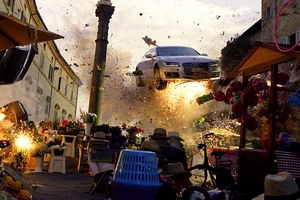 Melanie Laurent features opposite Reynolds but is strangely restrained, showing none of the vitality on display in her turns in Inglourious Basterds or Now You See Me. The remainder of the ensemble are placeholders and play their roles without ever becoming interesting. Of course, this is a Michael Bay film, and therefore the action sequences are given far more attention than character development.

There are moments – brief, but moments nonetheless – where the action threatens to become enjoyable or a chase scene surprises. It’s all shot in glorious Michael Bay Vision™ as well, so you know it’s going to look ok. Those moments are mirages, however, and things peter out into a disappointing and confusing film with little to recommend it.