Stephen King continues to be an ever-present figure in the media landscape with In the Tall Grass, which is approximately the 422nd adaptation of one of his stories. What sets this one apart is the other people involved – the novella was co-written with King’s son, Joe Hill, and the film was directed by none other than Vincenzo Natali, director of Cube, Cypher, Nothing and Splice. 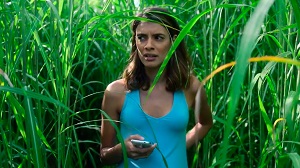 Like many Stephen King stories from the past 20 years, this feels like a remix of things he’s done before. Specifically, it’s reminiscent of ‘Children of the Corn’, ‘The Stand’ and ‘Desperation’. Twins Becky (Laysla De Oliveira) and Cal (Avery Whitted) are driving cross-country when they stop to assist someone lost inside a field of tall grass. You won’t be surprised to learn that doing so is a bad idea…

I often find it exciting when King reverts to a back-to-basics story. As fantastic as some of his bigger, more complex tales are, sometimes you just want to read something like ‘The Raft’, you know? In the Tall Grass is like that, though it always hints at something else, just seen off-camera. It’s a bit like Lovecraft’s work in that way – there’s something bigger than us in the universe, it’s been here much longer than us, and will be here long after we leave. And it does not care about us.

The setup is intriguing, even if it does rely on the twins making some dumb mistakes. And the moment new characters appear, we as the audience are immediately more suspicious than Becky and Cal. It’s like they’ve never read a Stephen King story before.

Natali does some really interesting stuff with VFX here, as he has done all throughout his career. The budget is decent enough, but I never forgot that we were almost always in a studio, especially when there was obvious sky replacement going on…

I was never bored, but the film could have ended at any time after the 45 minute mark. There are dozens of mini-climaxes that felt like endings, and when the actual ending arrived, my only response was “ehh, good enough. That makes sense.” There’s no narrative urgency, no real oomph. The film successfully shifts gears from first to second act…and then plateaus.

In the Tall Grass is a competent film, well made. But that’s about it. The only highlights are Natali’s visual flair and Patrick Wilson, who is making a habit of hitting it out of the park even when the film around him is rather silly (see also Aquaman).

In the Tall Grass is available now on Netflix.

In the Tall Grass