It’s a little strange that DreamWorks have taken their time with the How to Train Your Dragon franchise. It was four years between part 1 and part 2, and it’s only after a five-year gap that we’ve arrived at the third (and apparently final) movie. Compare this with the Shrek franchise, in which we saw four movies and one spinoff in the space of a decade. I realise there’s been spinoff HTTYD TV shows, but it’s weird to see a studio moving forward so slowly with what is presumably a lucrative property. 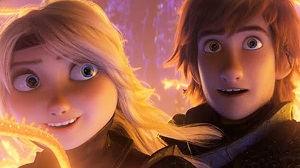 I’d like to say that such an approach has yielded quality results. And it has…up until now. Alas, The Hidden World is unspectacular. It’s not that there’s a lot wrong with it; more that it feels like an addendum rather than a glorious final chapter.

Hiccup (Jay Baruchel) has taken the village of Berk into a bold new world, but he still doesn’t feel confident in his role as their chieftain. When Berk is threatened by a new villain, Hiccup and his friends must find a new land for his people and their dragons.

The story is so slight that you could spoil the whole thing in a sentence or two. There isn’t much in the way of subplots, and there are no real character arcs. Astrid (America Ferrera) was cool and kick-arse by 2010 standards, but here she’s simply playing second fiddle to Hiccup, apparently existing only to support her man. I have no sense of what her ambitions or dreams are. Hiccup’s mum, Valka (Cate Blanchett), is present also…but has nothing to do. The new villain, Grimmel (F. Murray Abraham), shows promise but is never much of a threat. Continuing the trend of underwhelming the audience, even the titular Hidden World proves to be…just around the corner.

In fact, the writers messed up big time with regards to the geography. Berk always felt like an isolated village, and yet we have a whole new evil army nearby that no one’s mentioned before, and it’s only a few hours’ flight to the nearest island. Everything about this film is small. Inconsequential, even.

The animation is, of course, impressive. And it’s cool to see how much has changed in the industry in the last nine years. But it seems DreamWorks was too distracted by the technology. The dynamic lighting, the various textures and the ability to have hundreds of characters on screen at once is incredible. But it also makes it hard to watch at times. Sometimes, there’s simply too much going on. This is where good animation would utilise various techniques – composition, lighting, focal depth, no matter how unrealistic – to focus the eye on the important bits. At worst, it’s like the Special Edition versions of the Star Wars films, where locations such as Mos Eisley became distractingly busy.

The Hidden World is a disappointing end to a strong franchise. It’s not as epic or action-packed as the second film, nor is it as emotionally effective as the first. They should have gone out with a bang, not with a whimper.

How to Train Your Dragon: The Hidden World