After the astonishing success of Frozen ($1.3 billion USD) the first surprise about Frozen II is that it took six years to arrive. That Disney wasn’t keen to rush a sequel out the door showed admirable restraint, all things considered. The second surprise is that this sequel is…a bit meh. 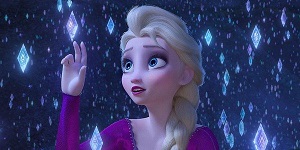 Frozen II sees sisters Anna and Elsa venturing to the Enchanted Forest, upstream from their own kingdom. There, they will discover a land in need of saving and learn some shocking secrets about their own family history.

Astonishingly, the pre-title sequence is really, really rough. Like, first draft rough. (More likely, it’s the result of too many rewrites, but you get the idea.) The film soon picks up, but even at its best, the script needed one more dialogue pass. The writing simply doesn’t pop in the way that Frozen and Moana‘s scripts did.

We get a few new characters, none of which stick in the mind after the credits roll, except one, who exists purely for the purposes of further queerbaiting (seriously, the sooner Disney takes the plunge with regards to Elsa, the better.) There’s subtext to be found – something about the environment, something about addressing our colonial past – but there’s nothing bold or thought-provoking about it.

The animation is 2019-standard, nothing mind-blowing like the water or hair animation in Moana.

Acceptable describes just about everything in Frozen II. It feels like it could have been a Disney+ exclusive, rather than a fully-fledged cinema release. This film had the same $150 million budget that the first did six years ago, which surprised me. Surely the highest-grossing animated film of all time deserved a bigger, bolder sequel?

I’m curious to see what the legions of fans thought of this. A significant proportion of them may have actually ‘grown out’ of the property, which is the risk you run when you take such a long time developing a follow-up.

Whilst I was never blown away by Frozen, I could at least see why it captured the hearts and minds of so many. With Frozen II, there is very little to set it apart from the scores of other 3D animated movies of the past ten years.