When it comes to television in 2019, everything old is new again. Resurrections of long-dormant TV shows have become the norm, and anime is no exception. Thus, 18 years after the end of Cardcaptor Sakura and its companion films, we get a sequel series that sees Sakura entering junior high. 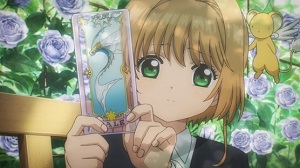 The first thing that strikes you about The Clear Card is how little has changed. It’s incredible just how much this feels like 90s CCS. The character designs have been updated ever-so-slightly, but this is definitely a show designed to appeal to people who grew up watching the original. The background art is where the biggest difference can be seen, with some beautiful 3D work and contemporary lighting techniques. Madhouse animation studio has created the perfect visual update.

The story is a reboot of sorts. There are more cards for Sakura to tame, a new mystery to unravel. Like the original series, however, it’s not the kind of show that’s in a hurry to advance the ongoing plot. The day-to-day struggles of life in junior high are the focus, as Sakura and Syaoran get – gasp – serious (or at least as serious as junior high relationships can be). This would be my main criticism – the story isn’t moving fast enough. There’s also a strangely obsessive focus on food. I don’t remember the characters being quite so food-oriented in the original show, but it’s on full display here. Be prepared to watch everyone cooking, looking at, anticipating, eating and then finally reminiscing about food.

The one thing I’m glad they ditched is Sakura’s continued surprise that the source of any one episode’s chaos is a card. The number of times she expressed shock when someone said, “Hey, maybe this is the result of a Clow card?” was mind-boggling.

At this point in the show, 11 episodes in, I have no idea if 2019 Cardcaptor can be more transparent in presenting the non-heteronormative relationships portrayed in the manga. Toya and Yukito seem to know where the other one is and what they’re doing at any one time – as if they were a couple – yet the show never actually says as much. I suspect that, in the interests of maintaining canon with the original anime, they will continue to simply insinuate, rather than be as up front as the manga was.

It’s – ahem – clear that The Clear Card isn’t simply made for grown-up fans of the original show. This is still a kids’ show, and as such don’t expect any complex stories or challenging plot twists. As an exercise in updating a dormant story without reinventing it, however, The Clear Card is excellent.

Cardcaptor Sakura: The Clear Card Part 1 is available now on Blu-ray and DVD from Madman.

←Carmen Sandiego She-Ra and the Princesses of Power Season 3→