It’s been a long wait for season 2 of Jessica Jones. Season 1 was released way back in 2015, and in the meantime we’ve had a couple of mediocre Marvel Netflix shows (‘Daredevil’ season 2, ‘Luke Cage’) and a couple of awful ones (‘Iron Fist’, ‘Defenders’). In fact, their output was becoming so unreliable that I skipped ‘The Punisher’ altogether. Thank goodness JJ is back to show us how it’s done. 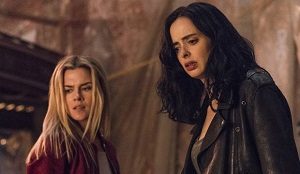 This is definitely a step up from the last time we saw Jessica (Krysten Ritter), in ‘Defenders’. She may have been the best thing about that team-up show, but here she’s surrounded by great characters. As with season 1, the most important supporting character is Trish Walker (Rachael Taylor), Jessica’s adoptive sister/best friend – everything else is just narrative garnish. It’s their drama that keeps me coming back to this series.

The show’s feminist credentials are perhaps unsurprising – considering you could call it a mash-up of ‘Buffy the Vampire Slayer’ and ‘Veronica Mars’ – but season 2 takes it a step further, with a policy of women-only directors. And it pays off. This is a show about relationships between women. The Bechdel test may be a rather primitive tool in 2018, but this passes with flying colours. Sure, Malcolm (Eka Darville) is still present and correct, and there are newcomers Pryce (Terry Chen) and Detective Costa (John Ventimiglia) that shine in smaller roles, but it’s Jessica, Trish, Dorothy (Rebecca De Mornay) and other surprise appearances that make up the core of the story.

And we can’t forget Carrie-Anne Moss as Jeri Hogarth, who’s been a mainstay of the Marvel Netflix shows. This season really puts Jeri through the wringer, and Moss’ performance might even be a career best.

I’d be lying if I didn’t say that there aren’t any wonky moments. I honestly can’t decide if I liked Janet McTeer’s performance here or not; sometimes her portrayal feels nuanced, other times it’s more pantomimic. Suffice to say, she may be a contentious character.

At the centre of all this is Ritter, whose character is just so damn brilliant. Jessica is fascinating, powerful and damaged, and an absolute arsehole to everyone around her. She’s a woman so compelling that I can’t look away, even when she’s at her self-destructive best. Though this doesn’t reach the heights of the near-perfect season 1, this is a good continuation of her story. Long may this show continue.