Based on the book by Vera Brittain, Testament of Youth is a powerful historical drama/war film and a brilliant showcase for Alicia Vikander’s talents. 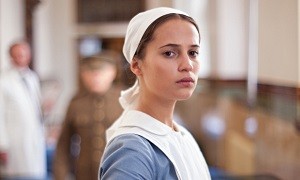 Vera (Vikander) is desperate to go to Oxford but her father (and, quite frankly, most of society) won’t have a bar of it. Her brother, Edward (Taron Egerton, unrecognisable from his character in Kingsman: The Secret Service) is the only one on her side, but she’s barely succeeded in her goal when the Great War breaks out. We follow Vera from her Oxford days to her time serving as a nurse close to enemy lines.

In case you hadn’t guessed, this isn’t a happy film. It doesn’t actually show any of the fighting going on just outside of Vera’s experience, but like her, we see the results as she tends to the wounded and dying. This is the first feature film adaptation of Brittain’s 1933 book, and it’s surprising that it’s taken this long to appear. Being written from the perspective of a young woman, it’s a refreshing take on the war film genre.

Words cannot describe just how incredible Vikander is in the lead role. The film takes the time to stick close to Vera during her solitary moments, and really lets us see inside her head. Whether she’s remembering the briefest of gentle touches from the object of her affection, Roland (Kit Harington), or imagining what’s going on behind enemy lines, director James Kent keeps the focus on her. Vikander is such an amazingly expressive performer that even the quietest moment is filled with feeling.

It’s also important to note that this is a much better film than Seventh Son, which also featured Vikander and Harington. Even better news is that five minutes after Harington’s appearance, I forgot that I was watching Jon Snow. The same couldn’t be said for the fleeting appearances from Dominic West, however, as it was hard to shake the idea that McNulty had been dropped into ‘Downton Abbey’. Hayley Atwell also popped up in a blink-and-you’ll-miss-it moment.

The only real flaw with Testament of Youth is that the film’s strongest moments are all over a good 20 minutes before the credits roll. Nevertheless, this is a powerful film that deserves to be seen. Vikander’s presence is going to be felt on the big screen in a big way in 2015 (IMDb has six 2015 films to her name), so we’re all in for a treat.

Testament of Youth is released in Australia on 23 April 2015.

←The Spongebob Squarepants Movie: Sponge Out of Water 54 Days→