Single location thrillers are good for the budget but tricky from a writing perspective. Special attention must be given to foreshadowing, escalating tension and maintaining pace. For every Rear Window, there’s a Rope. One thing is for certain, however: I’m always up for a single location thriller. 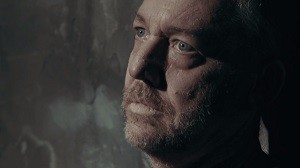 54 Days sees a group of five people taking refuge within a nuclear shelter after the outbreak of war. Tensions are already high within the group, and the fact that the shelter was only designed for two adults and two children doesn’t help matters.

The film begins with a slickly efficient scene out in the open, introducing the characters and their relationships. Very quickly the unthinkable happens and they’re all rushing to the shelter. Once there however, the pacing becomes uneven. We almost immediately jump forward a period of time, which is problematic because things become dire all too quickly. I would have preferred that conversation didn’t turn to matters of life or death with such alacrity.

The cinematography is stunning. From start to finish, this is a beautiful film to look at. Nathaniel C.T. Jackson’s work behind the camera is the film’s best asset, along with the art direction/set design. The colours are drab yet rich at the same time, and the bunker itself is full of wonderful details. Special mention should also be made of Dimitri Mentis’ score. There are several well-executed montages that perfectly encapsulate the mood in the bunker.

There are a few moments that had me on the edge of my seat – one sequence involving Morse code made brilliant use of onscreen text – but they weren’t maintained for long enough. I needed an ongoing mystery, or some unresolved tension that would carry me through the film, rather than such moments popping up every now and again.

The performances are fine, dodgy accents aside, and they are all distinct from each other, without any redundant characters. My only real qualms are with the script, which I feel should have had more of a focus on pacing and escalation.

For a brilliant example of how to shoot in a confined space with what I can only assume is a limited budget, 54 Days is exemplary. You only need look at the likes of Lebanon to see how not to film in a single, cramped set. It’s just a pity that the technical prowess of this film isn’t matched by the script.

54 Days is available to stream and/or purchase direct from Vimeo.