I have never actually sat down and watched ‘Spongebob Squarepants’, so Sponge Out of Water is the first time I’ve been exposed to the trials and tribulations of the denizens of Bikini Bottom. Opening with a live action segment, Sponge Out of Water sees a pirate played by Antonio Banderas traipsing through jungle in search of treasure. First and foremost, it should be said that Banderas is excellent in this film. Not only did he make me wish he’d been in the Pirates of the Caribbean movies, but I also gained an appreciation of his ability to act opposite characters who aren’t there, but will be added in post-production. 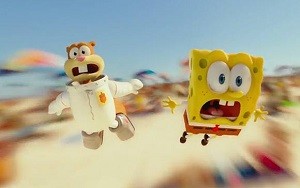 After this segment, the film movies underwater to what is essentially a big screen version of the TV show. I assume the production values in this portion of the film are more impressive than the usual Nickelodeon episodes, but it didn’t look particularly special to my eyes. The plot concerns the ever-so-important Krabby Patty formula going missing, and the ensuing chaos that erupts in Spongebob’s hometown. This leads them on an adventure that takes them through time and, as promised by the title, onto dry land.

Moving into the real world is, of course, the sequence that featured most prominently in the marketing material, but it doesn’t happen until the last 25 minutes or so of the film. Those sequences are particularly impressive and, indeed, the highlight of the film. The fact that no one seems to notice the anthropomorphic sea creatures is a little bit strange, but not a big issue, I guess.

For a Spongebob newbie, this was an interesting experience. The fact that just about all the characters are voiced via annoying and over-the-top vocal deliveries makes it one of those shows that parents probably ask their kids to turn down all the time, whilst the scattershot plot means that the film isn’t entirely satisfying. It feels as if this script was written on the go, or perhaps that writers Glenn Berger, Johnathan Aibel, Stephen Hillenburg and Paul Tibbitt simply weren’t concerned with narrative structure or, indeed, providing any kind of moral.

For high-intensity, madcap plotting, Sponge Out of Water certainly succeeds. It’s the kind of film that most parents would have to suffer through, however, rather than any kids’ animation that has a broader audience in mind. That being said, when your favourite cartoon gets a big screen outing, should it attempt to be anything other than an extended version of that which you love? Sponge Out of Water mixes things up enough to keep things entertaining, but isn’t a film I’d rush out to watch a second time.

←It Follows Testament of Youth→

The Spongebob Squarepants Movie: Sponge Out of Water