A film that feels much like director Matthew Vaughn’s audition for the next Bond film, Kingsman: The Secret Service is every bit as nutty as his 2010 feature, Kick-Ass. This should come as no surprise, since this is also based on a comic by Mark Millar, so expect the same kind of self-referential madcap anarchy that made that film so good. 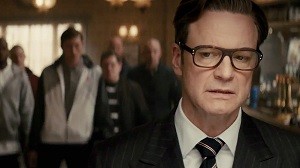 Taron Egerton plays a wayward yoof who is recruited into the super-secret spy agency whose agents take Arthurian codenames and have great taste in suits. His mentor is the dashing Harry Hart, played with aplomb by Colin Firth. Together with Jack Davenport, Michael Caine and Mark Strong, this feels like a film filled with those who missed out on playing Bond. (I checked; apparently Caine is the only person in that list who was considered.)

Kingsman wears its James Bond influences on its cuff-linked sleeve, and seems to love the spy genre as much as it spoofs it. The pacing never lets up, and there are a host of great performances. Aside from The King’s Speech, I think I only truly enjoy Firth when he’s playing against type. Thus, his performance here is up there with Then She Found Me. Getting to see him playing the action man is a treat, and it seems that, together with the likes of The Railway Man and Devil’s Knot, Firth’s choices have been getting a little darker of late.

Samuel L. Jackson plays Valentine, one of the most eccentric villains we’ve seen since Gary Oldman’s turn in The Fifth Element. Mark Hamill is great in a small role, whilst the heretofore practically unknown Sophie Cookson is perfect as fellow recruit, Roxy.

My review thus far has been rather glowing, but here’s the thing: Vaughn’s secret is that he keeps his budgets low, so he can do what he wants. It worked for Kick-Ass and it almost works here. It means the film doesn’t pull any punches and Vaughn doesn’t have studios breathing down his neck, telling him when to hold back. This is both a boon and a curse. There are many occasions in Kingsman where this kind of freedom makes for the action movie we’ve been dying to see, but there are almost as many moments when you wish there had been someone there to tell him to tone it down a little. This means that, by the time we get to the climax, the quality really does start to suffer. Some last minute over-the-top, tone deaf and crassly sexist humour simply leaves the audience confused rather than amused. It’s as if the filmmakers were so preoccupied with whether or not they could, that they didn’t stop to think if they should…

All in all, it’s a mixed bag. Vaughn sure knows how to shoot action, and if Kick-Ass 2 left you disappointed, then this film might be right down your alley. Would someone please hand him the keys to the Bond series now?