If you ever needed proof that I’m not that big a Tarantino fan, consider this: I only own one of his films, and it’s Death Proof. That’s right – the one no one likes. For when it comes to Tarantino and I, there’s only so much poorly paced, endlessly stagey and über-masculine dialogue one can take. But I can see the appeal for others… 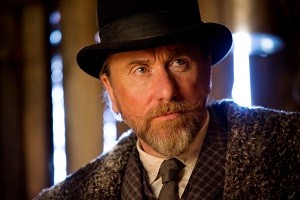 That being said, I enjoyed The Hateful Eight a lot more than his usual schtick. Presented in 70 mm and with a running time of 187 minutes (because Tarantino), the film continues his love for old school cinema, right down to the three minute ‘overture’ that opens the film, something I don’t think I’ve seen since Dancer in the Dark. The plot concerns a group of misfits who take shelter in a remote cabin during a snowstorm. These cowboys, bounty hunters, criminals and retired soldiers are a suspicious lot, and for good reason.

The Hateful Eight unravels a lot like a play. This is fine, and the fact that the scenes flow from one to the other – as opposed to the off-kilter rhythms of Inglourious Basterds and Django Unchained – means that the film isn’t as tiresome to watch as one might expect. I love the confined setting, and there aren’t enough positive adjectives in the English language to accurately describe Ennio Morricone’s sublime score.

What didn’t I like? Well, I was hoping that the mystery elements of the film would be front and centre. The set-up sounded like a modern-day ‘And Then There Were None’, and yet such dips into the genre are fleeting. Instead, it’s a disparate bunch telling stories by the fire, for the most part. This is all well and good, but I can’t see myself rushing out to see the film again.

As for the 70 mm presentation…considering most of the film is shot indoors, on a single set, is it fair of me to say that it seems like a waste of the format? Sure, there are some grand landscape shots every now and again, but like I said, this is much closer to a staged play than a sweeping epic.

There are too many performers to mention them all, but the standouts for me were Walton Goggins and Tim Roth. Goggins is one of those brilliant character actors that pops up all the time, whilst Roth is having an absolute ball as Oswaldo Mobray. Seriously, the simple act of Roth pronouncing his character’s name had me in stitches.

So, in the end, this is a Tarantino film with that little bit extra for me. The premise makes it more interesting than usual, even if the script is still filled with the standard “it would be offensive if it weren’t so ridiculously hip” lines. The Hateful Eight won’t convert someone who doesn’t like the man’s films, but it’s a nice change of pace after Inglourious Basterds and Django Unchained felt like one and the same film.