Is there anyone that gets as much of a kick out of their job as Tarantino? As we all know, he loves his movies. And it shows.

This time around he’s exploiting the Second World War and the Third Reich, and why the hell not? Inglourious Basterds gleefully rewrites history, not letting pesky details such as ‘true events’ get in the way of a good story. If you found Valkyrie disappointing, then perhaps this will be more to your taste. 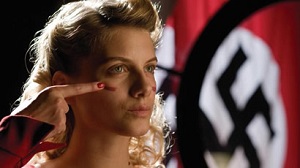 The ‘basterds’ are a group of Jewish Americans cutting their way through enemy lines and torturing and killing Nazis as they go. Led by Lt. Aldo Raine (Brad Pitt in his best performance of late) this bunch of psychos is sneaking around Hitler’s Europe butchering his best and finest. Strangely enough, I didn’t see as much killing as I expected. Most of the film focuses on one particular scheme that aims to strike at the very heart of the Nazi war machine.

Lt. Raine has a vaguely interesting bunch of characters following him. In a terrible move, Tarantino cast his pal Eli Roth (director of Cabin Fever, Hostel and Hostel: Part II) in a prime role – that of Sgt. Donny Donowitz AKA the Bear Jew, who dispatches with his enemies in his own unique style. Roth clearly isn’t an actor, and though he certainly looks the part, there are performers out there who would have made the role more memorable. Michael Fassbinder plays Lt. Archie Hicox wonderfully, and it’s the ‘legitimates’ such as he that make the film. Mélanie Laurent is fantastic as survivor Shosanna Dreyfus whilst Christoph Waltz absolutely steals the show as Col. Hans Lander, the most jolly of Nazis.

The problems I have with Inglourious Basterds are the same ones I have with most of Tarantino’s work. He makes scenes, not movies. To be sure, they’re fantastic, brilliantly executed scenes most of the time, but I’ve yet to see a narrative of his that flowed all the way through. This flick is basically six or seven really long scenes (that somehow add up to two and a half hours) marked by chapters that don’t fit together very well at all. I was also mystified by the fact that the film has two concurrent narratives that don’t complement each other at all.

Tarantino’s storytelling mechanics are pretty recognisable after all these years, and it’s strange that he hasn’t created smoother films. Inglourious Basterds has many, many high points (no one will be surprised to learn that the music is fantastic) and it seems fitting that it’s coming in at the tail end of Hollywood’s recent Nazi themed obsession, but it can’t escape a clunky and overlong construction.

If you’re a fan of this master auteur, then you’re not going to be disappointed. For everyone else, I really couldn’t say – you could love it, hate it or profess ambivalence. It’s a violent, merry journey into a vengeful history that never happened.

←Chronicle of a Kidnap The Sky Crawlers→