To say that Sisters’ success rests solely on the shoulders of Tina Fey and Amy Poehler is unfair, because the script isn’t half bad. 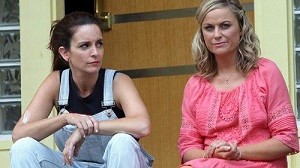 Basically the kind of vulgar comedy we’ve seen many times before, Sisters sets itself apart by featuring a predominantly female cast. The fact that this is about two women having a midlife crisis is enough to make the setup interesting. Considering how lacklustre Hollywood’s representation of woman can be, this is the type of film that wouldn’t have been greenlit if not for the success of Bridesmaids. And you know what? I preferred this to Paul Feig’s mammoth hit, primarily because this doesn’t rely on the safe yet mildly offensive mantra that women are their own worst enemies and never a moment away from stabbing each other in the back.

Fey and Poehler play Kate and Maura Ellis, two sisters who travel home when they discover their parents are selling the family property. They’re unwilling to leave the past behind, and before long have organised a party together with their old high school associates.

Like I said, there’s nothing ground-breaking in the premise. We’ve seen the man-child version of this film before, but the fact that female relationships are front and centre makes it much more interesting. Thus we’re concerned about Kate and Maura’s sibship, Kate’s relationship with her daughter Hayley (Madison Davenport), and the sisters’ relationship with both their high school peers and their own parents.

We get an obligatory romance that plays out quite nicely, but the real reason you’re watching the film is for Fey and Poehler’s effortless comedic performances. I was actually worried in the first five minutes of Sisters – every single joke fell flat, and I had the horrible feeling I’d wasted my money. The moment the Ellis sisters were in a scene together however, it was like the flick of a switch. The film is consistently hilarious, particularly when it’s just Poehler and Fey making fools of themselves. Unlike many of Judd Apatow’s comedies, the film never overstays its welcome, nor does it feel like we’re simply watching extended unscripted improvisation play out instead of actually moving forward with the story.

Sure it’s unoriginal, sure it’s crass, but Sisters is a fun comedy that deserves your time. Long may Fey and Poehler rule the box office.