A cynical response to the success of Aquaman would be that audiences (and critics perhaps) have simply had an “It’s a DC film that isn’t awful! Yay!” moment. And that wouldn’t be too far off the mark. But above all, this is a fun, often spectacular (and spectacularly stupid) superhero movie. 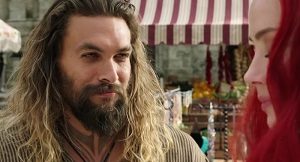 I’m sure the Justice League reshoots necessitated some last-minute fiddling with this film, because whilst Aquaman has very few links to the DC films that preceded it, there are a couple of moments that made me go “huh?” For instance, here he doesn’t even know Mera’s name, despite their conversation in Justice League suggesting some kind of history between them.

But the thing is, it doesn’t really matter, because this film is almost entirely self-contained. It worked for Wonder Woman, and it’s clear that DC decided this was the way to go here, also. Sometimes people don’t want to worry about whether they’ve seen the 19 prequels before they go to the next superhero blockbuster (not naming any studios there, whatsoever. Oh no, I would never!)

One thing’s for sure: James Wan knows how to go big. I didn’t see his Fast and the Furious sequel, so for someone like me who’s only really known him for his horror movies, it’s surprising just how many stunning, large-scale VFX sequences impress. In fact, they’re pretty much the best parts of the film.

Because, to be honest, Momoa isn’t the greatest actor in the world. He’s amazingly good looking and definitely charismatic, but he doesn’t strike me as someone who has a genius acting instinct. Basically, he’ll do what he’s told by the director – and sometimes, despite his best efforts, it just doesn’t work. 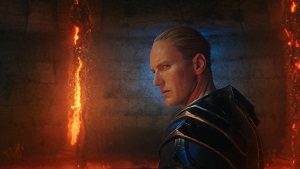 They’re at pains to explain that Arthur is a laid-back, cool dude who you’d sink a few beers with at the pub. But such moments always feel forced. He’s spent too much time at the gym for someone who apparently doesn’t have any aspirations. And considering he spends much of the film ignoring the hero’s call, this conceit has its work cut out for it.

The other performers succeed to varying degrees. Patrick Wilson is excellent, and manages to act convincingly even when half his face is obscured by a helmet (training in Watchmen must have helped). Dolph Lundgren also does a great job, whilst Nicole Kidman and Temuera Morrison are simply okay. Willem Dafoe struggles, however. He never looks comfortable. Finally, Amber Heard is…decent. She won’t blow you away, but there’s nothing poor about her performance either.

A lot about this film is just fine. But what really works is just how outlandish it all gets. Aquaman dials it up to 11 for much of the runtime, and isn’t afraid to go full fantasy. And when you have High Elves wielding laser guns whilst riding giant seahorses, you just have to sit back and let it happen, you know?

We’ve come a long way from Batman Begins, which was at pains to explain how such outlandish things could exist in the real world, or even Thor, which resorted to the “fish out of water” story so that the really fantastical stuff was pushed to the side. Now, a film like Aquaman can come out looking like a mash up of TRON, Lord of the Rings and HP Lovecraft’s Cthulhu mythos. And…I’m kinda okay with that.

←Mowgli How to Train Your Dragon: The Hidden World→