It sounds pretentious, but I can’t imagine that the superhero genre has anywhere left to explore now. It’s hard to believe that this film was finally made, after Terry Gilliam, Darren Aronofsky and Paul Greengrass all stepped up then passed on directorial duties. With the stupefying success of 300, Zack Snyder was the man who eventually took on the arduous task, and I believe he’s made the best adaptation possible from such an epic and all-encompassing story. 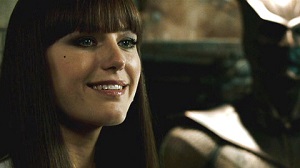 After proving that MA (or R-rated in the US) films do make money, Snyder was able to make a very adult film – and indeed this is not for kids. It’s brutal and violent, and asks us to sympathise with characters so flawed that they make Bruce Wayne look like a well-adjusted millionaire who simply likes fancy dress.

One of the keys to the film’s success is the fantastic casting. Dan Dreiberg/Nite Owl II is effectively our ‘way in’ to the film. Patrick Wilson is incredible in this role – playing a superhero who is insecure, depressed and impotent, except when he needs to beat up bad guys. Walter Kovacs/Rorschach is of course the character that gets the most attention, which is brilliant considering how much of a psychopath he is. That his mask shifts in front of your eyes isn’t how I imagined it from the comic, but it works. Jeffrey Dean Morgan plays Edward Blake/The Comedian with aplomb, and it’s incredible just how much Jackie Earle Haley looks like Walter from the comic (unfortunately this draws attention to how silly the Nixon prosthetics look). Billy Crudup is perfect as Dr Manhattan/Jon Osterman, as is Matthew Goode as Adrian Veidt/Ozymandias. Malin Akerman probably has the least complex role as Laurie Jupiter/Silk Spectre II, and it’s a pity that the film continues the seemingly never-ending trend of the genre – failing to provide decent roles for women (perhaps rectifying this will be the ‘final frontier’ of comic book movies… where are you when we need you, Joss?). The fact that none of the actors are ‘above the title’ stars means we can fully immerse ourselves in the film.

Like 300, the cinematography is pompous and showy (I seem to remember the comic had a lot more pink), but this can easily be forgiven. The soundtrack is fantastic – and gloriously 80s for the most part. We have well and truly reached the point where that previously embarrassing decade is now retro.

It seems like the whole project is a concerted effort to be as true to the comic as possible, whilst not making an 8 hour epic – and some of this strain effects the film overall.

It doesn’t flow in the traditional filmic sense – there are a lot of climactic scenes scattered regularly throughout the movie. This is only a bad thing insofar as it stops the film from being truly emotionally effective – it left me cold in a similar way that The Dark Knight did.

That we live in a world where such a subversive film can get studio backing (well, after a long and wearisome journey, anyway) is a reason to exalt in its presence. Strangely, after all the complex, conflicting and dark characterisations and backstories, it’s hard to be impressed with the action scenes. They are brutally impressive, and drive home the idea that what these ‘heroes’ do isn’t heroic at all, but they’re not all that exciting.

It’s a pity that Alan Moore’s still got it in for the film industry (as with V for Vendetta, his name isn’t mentioned in the credits), because this is the best film it could be.

It may be the best movie it could be, as Stuart suggests, but that doesn’t mean it isn’t also overblown and frequently dull, with a clumsy script and inaccessible characters. In fact, many viewers will be hard pressed to comprehend the hype – or, for that matter, the incredibly positive critical response.

The washed-up superheroes of Alan Moore’s alternate early 80s are introduced in a prolonged faux comic book opening credit sequence that ends up being the most effective of the film. 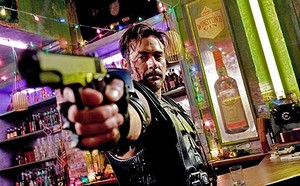 Nixon is still in charge after repealing the ‘two term’ rule, and the world is in the grip of the Cold War and the likelihood of nuclear holocaust. Meanwhile, a former superhero is killed in his apartment, eventually leading his motley group of colleagues to band together in an attempt to prevent the inevitable.

Director Zack Snyder does manage to evoke a believably dystopian alternate world, with his characters enveloped by the actual and metaphoric darkness of their time. (For much of the film, the brightest light source in the cinema was the ‘Exit’ signs rather than the screen, in what may have been an ironic warning for the observant.) That superheroes are (usually) people too is drummed into the viewer with all the subtlety of the giant particulate penis of Dr Manhattan – these people often seem better suited to straightjackets rather than the more traditional cowl and cape.

Probably the biggest problem in the film is this insistence on demonstrating the fallibility of the Watchmen. Long and often unengaging backstories told in flashback compete with the ongoing narrative, such that it seems to take forever for the characters to decide to actually do anything. Ok, we got it, they’re flawed, move on already. That the film ends up with a running time of 163 minutes is largely down to this excess padding, and one wonders how effective it may have become with a tighter focus. The difficulty of creating a believable alternative reality with three dimensional characters may well have worked against the desire to make a film that remained compact, but the pendulum seems to have swung too far the other way such that the story is never told.

The CGI is generally done very well indeed, and is often used to punctuate the extreme violence of the combat sequences to great effect. It is less effective, however, in creating Ozymandias’ feline companion and in supporting Dr Manhattan’s Martian jaunt. The action is supported by what is most likely the loudest soundtrack yet on screen – truly, one has to wonder at what point audiences will be risking their hearing for the sake of a film.

The cast are generally adequate, although Malin Akerman struggles with a fairly average role, while Matthew Goode seems to have been instructed to play Adrian Veidt as git. The standout is probably Jackie Earle Haley as The Comedian, although Billy Crudup is hard to measure in his enhanced form.

That frequently throughout this incredibly long film I felt compelled to wonder when it would get going is a sure sign of its failure to balance character development with storytelling. Whether the bulk of the film-going public who are not Alan Moore fanboys will appreciate Snyder’s offering remains to be seen.