Batman Begins exists in a bleak version of the renowned Gotham City, with a depression causing ghettos and crime, and even worse, the breakdown of ideals. Introduced to us by way of flashbacks, is seemingly the only good man left, Thomas Wayne, who is attempting to raise his son to believe in Goodness and Right. His demise leads his son down a dark path of guilt, desire for vengeance, and mostly of fear. It is from here that Batman evolves. Finally giving much needed depth to the famous character, the development of Bruce Wayne the powerful man is a joy. From prisons in an unspecified Asian nation, to learning battle and self-mastery techniques from the mysterious Ra’s Al Ghul, we see how a boy became a bat. Not since Spider-Man 2 have we had such an effective exploration of the humanity of a superhero, and in some ways this surpasses even that great film.

David S. Goyer wrote the screenplay, and there are many themes present those familiar with his previous efforts will recognise. The seedy underbelly beneath civilised society is something he revealed in the Blade series and also in the excellent Dark City. Beyond that, he uses standard comic book forms such as the loner hero, the threat the hero poses to those he loves, and so on, but introduces another. Seemingly inspired by The Village and its metaphor for post-9/11 America, he uses the World Trade Centre attacks, and the motives of those behind them as inspiration.

His bad guys are true believers in their cause, not just opportunistic thieves and murderers. The League of Shadows, led by a fanatic who believes that Gotham City is corrupt and needs to be cleansed, is a ready analogue to Al-Qaeda and Osama bin Laden. The tactic of using fear upon the residents, such that they turn on each other and destroy themselves, is commonly associated with terrorism, and many would also say that post-9/11 this is what is happening in the USA. There are some who would claim the Patriot Act, and the constantly updating Homeland Security threat level are symptoms of that fear. Certainly the makers of Fahrenheit 9/11, Outfoxed: Rupert Murdoch’s War on Journalism and The Village seem to think so. By giving both his hero and his villains true complexity of desire, Goyer imbues Batman Begins with a thoughfulness not commonly seen in average Hollywood action fare. This is masterfully carried off by the most under-rated of actors, Christian Bale, who supplies Wayne/Batman with both sex appeal and charm, but also a darkness that is impossible to ignore… none of the Michael Keaton nice guy for this Batman. Bale is supported by a wonderful cast, including Michael Caine, Liam Neeson, Katie Holmes, Gary Oldman, Cillian Murphy, Tom Wilkinson, Rutger Hauer and Ken Watanabe – truly has such a cast been assembled for a comic book adaptation before?

The visual style is extremely important to this film, and the effects are done very well. The use of the darkness in the shadows brings atmosphere, and the design of the costume and bat-paraphernalia are suitably bleak and foreboding. I did find fault with the editing, with once again a major action film hampered by its use of ridiculous hyper-kinetic cutting to and fro, that makes several of the fight scenes almost unwatchable. The first such scene, in the prison yard, is a mess – not once can the audience see who is fighting whom, and it is only our expectation that Wayne is an unbeatable streetfighter that lead me to assume he was the one winning. With such little differentiation by colour as is afforded by setting a fight in grey mud, with the fighters in grey mud-covered clothing, the editing makes it even harder.

That being said, Batman Begins is otherwise a very strong film, with a unique vision of its hero, and the patience to let us see it. It should be applauded for redressing the damage done to the Dark Knight by years of Keaton/Kilmer/Clooney farce.

In a word: astounding.

I saw Batman Begins last night and I still haven’t gotten over how incredible this film is. This is easily the best comic movie ever. (But surely Stuart, I hear you saying, you only recently said that about Sin City? Well I stand by my statement that Sin City is the best comic book adaptation ever, but Batman Begins is certainly a better film). 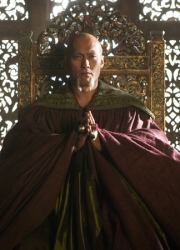 I always thought Batman was pretty cool – he was more a vigilante than a superhero, and this darkness was portrayed pretty effectively in Batman and Batman Returns. This film, however, takes that original notion and turns it upside down. In fact the ideological debate that rages on between the main characters in Batman Begins is both fascinating and seemingly inexorable. Bruce Wayne is a figure constantly bombarded by conflicting ideals from his parents, peers and teachers. Every single character in this film has clear yet complex motivations, and this intellectual intensity puts most comic book – and indeed most Hollywood – movies to shame. It’s hard to believe that Goyer gave us the woeful Blade: Trinity, because his collaboration here with Nolan is incredible.

I understand if there are any sceptics out there – after all, how could there be life left in Batman after the four recent films, the animated series, 60s movie and TV series? But believe me, Batman Begins takes the superhero to new heights (and depths). In fact it goes where no other comic book movie has gone before. This film makes Spider-Man and Spider-Man 2 seem naïve and one dimensional by comparison.

The cast is fantastic. As Mark said, the actors they managed to collect for this feature is almost unfathomable. Why would Gary Oldman and Morgan Freeman be interested in such unimportant roles? Don’t get me wrong, they deliver typically fantastic performances, but all the same I wonder if they only took on the characters just ‘cos they were playing against type (and probably paid a heck load of money). Liam Neeson is fantastic, and gives his all in a film I might have expected him to have little interest in. (Who knows what I’m basing that assumption on… I stood next to the guy once, and that’s about it.) Cillian Murphy is fantastic, and Christian Bale does a great job as usual. One of the better creative choices made was to have the latter assume a different voice when in costume, which not only helps with suspension of disbelief with regards to his secret identity, but also adds to the fearsome nature of ‘the bat’.

Fear is most definitely the single most important element of Batman Begins. The political and moral subtext to this film is extraordinarily powerful, and it’s hard to believe that such a strong attitude could be expressed in a major studio picture. I wonder if the film will make any sense to audiences in ten or twenty years time – as Batman Begins is very much rooted in the current political climate. Honestly, between Star Wars: Episode III and Batman Begins, Hollywood seems to be taking a very definite stance on the way the world is headed. 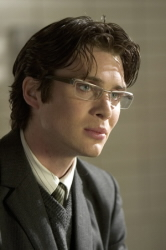 Strangely enough, the action in Batman Begins is not too important. The Dark Knight, as portrayed here, is all about metaphorically making an impact, rather than fists literally impacting with faces. Sure, he beats some people up, but as Mark said we don’t really see it too well. I think this has more to do with the overarching thematic element of fear than the current action movie trend.

Regular readers would be surprised to learn that the running time of 141 minutes didn’t bother me in the slightest. This is a very dense film: the first half hour speeds along, packing in a heap of information. The montages in the first half are some of the best sequences in the film. Special mention should also be made of the score. Having two big names – Hans Zimmer and James Newton Howard is again testament to the enthusiasm so many people showed in the project. The music is fantastic, never slipping into any distractingly overt themes, but complementing the imagery perfectly.

In a similar fashion to Sin City, there are very few females here. Batman seems very much to live in a man’s world. Katie Holmes’ Rachel certainly has something to say, but her actions very much take a back seat in the testosterone fuelled Gotham City. When I was talking to Mark he also made reference to the fact that Bruce Wayne seems to only mourn the death of his father, rather than both of his parents. Alas, the comics thus far selected by Hollywood have been very male oriented affairs.

Batman Begins is perfect. Hopefully this will open the door for more DC Comics adaptations, as Marvel seems to be struggling with its fairly lacklustre characters of late (The Punisher, Daredevil, Elektra, The Hulk). Bravo.

←We Don't Live Here Anymore The Upside of Anger→