Far be it for me to complain about the Golden Age of Television nor Netflix’s absurdly large output, but could they at least stop incorrectly naming their seasons? ‘Season 3’ of She-Ra and the Princesses of Power is more accurately the second half of season 2, and I’m beginning to realise just how they managed to do eight seasons of ‘Voltron: Legendary Defender’ in just two and a half years. 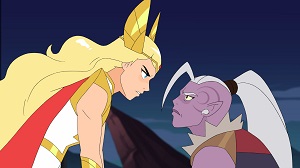 Whilst I’ve only mentioned She-Ra in passing here on hoopla.nu, it’s a show of such high quality that it consistently surprises me. With Noelle Stevenson behind the wheel, it was always going to be good (seriously, ‘Lumberjanes’ is one of the best kids comics I’ve ever read), but this show excels on every level.

First off, the character designs are great updates of the originals. Whenever we’re introduced to someone new, it’s fun to Google the old toys to see how much they’ve changed whilst still retaining the spirit of the original. The background art is also reminiscent of late 70s/early 80s sci-fi and fantasy. Overall it’s got a Moebius-meets-80s-Miyazaki vibe.

The script is equally impressive. Snappy and hilarious, the dialogue ensures the pacing never drags. Even better, all of the villains actually have depth. It’s invariably a case of “doing the wrong thing for the right reasons”, which ensures that, whilst it’s a cartoon, the antagonists are never purely cartoonish. And central to the drama is of course the relationship between Adora and Catra – one of the most interesting examples of friends-turned-rivals-turned-enemies that I’ve ever seen in children’s programming.

Season 3’s arc is epic, even if it only comprises six episodes. The mythos gets expanded in a big way, and we learn more and more about Etherea and Adora’s place in the world.

She-Ra and the Princesses of Power is effortlessly inclusive whilst also, at its core, being about your traditional good-versus-evil struggles. The emotional complexities put most of the 80s cartoons I watched growing up to shame. I can only hope that, like She-Ra, Kevin Smith’s recently-announced ‘He-Man and the Masters of the Universe’ reboot also manages to be as good as I remember the original series being, and not as lame as it actually was. (Seriously, if there’s one show that should remain in your memories, it’s He-Man; don’t be tempted to try and relive the glory days by rewatching it, folks.)

From a show purely designed to sell toys to a complex, hilarious and inclusive cartoon, She-Ra and the Princesses of Power continues to go from strength to strength. I’d just prefer if they released each actual season in its entirely, rather than splitting them up.

She-Ra and the Princesses of Power Season 3 is available now on Netflix.

She-Ra and the Princesses of Power Season 3