After a shaky start with Alien³ (most of which wasn’t his fault), David Fincher has turned out to be one of the most gifted directors of the last fifteen years. Since Se7en in 1995 many – like me – have eagerly awaited his every move. Zodiac arrives five years after the fairly mainstream yet thoroughly enjoyable Panic Room, and once again he’s created an unconventional masterpiece. 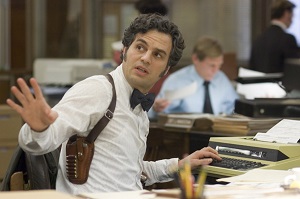 The script is by the writer of Darkness Falls, though probably the less said about that the better. Zodiac spans four decades, from what is considered to be the killer’s second double murder in 1969 through the years to the early 90s. The recreation of San Francisco through the decades is stunning, as Fincher shows his penchant for using CGI to unusual ends. The costuming, hairstyles and set design has been lovingly recreated, and the whole film has a muted yet clean appearance. Even the Paramount and Warner Brothers logos at the beginning of the film are ‘classic’ versions of the symbols. We follow the major players sporadically throughout the narrative, which jumps forward rather quickly, sometimes skipping months or even years several times within 5 minutes.

Jake Gyllenhaal plays Robert Graysmith, the author of the book on which the film is based, in his usual socially inept, childlike manner. Over time as multiple investigations over several police departments fail he becomes more and more obsessed with the mystery. Mark Ruffalo plays Inspector David Toschi, whose investigations lead down some very promising avenues, whilst Robert Downey Jr. plays journalist Paul Avery who slowly begins to appreciate the bumbling Graysmith. Ruffalo could quite easily find himself cornered in police roles soon, what with In The Cut and Collateral, and Downey Jr. certainly takes his performance down a familiar path.

It’s the randomness and disconnected nature of the Zodiac’s acts that makes this story so compelling. This isn’t your traditional Hollywood serial killer – he makes contact with the papers yet doesn’t want to be caught. He has no particular M.O. and boasts about crimes he didn’t commit. At one stage the police have a list of 2500 suspects and are forever a dozen steps behind him.

This isn’t even remotely like Se7en, a film that set the standard for serial killer films over the last decade. The detailing of the killings (though at one particular stage horrific) is nowhere near as precise or morbid as the Andrew Kevin Walker penned film. Zodiac sees Fincher on the top of his game, making the audience just as fascinated and frustrated as the characters doing their best to solve the puzzle. I’m not too sure it would hold up quite so well a second or third time, but this is highly recommended viewing.

←The Contestant The Science of Sleep→