Despite Michel Gondry’s last film being Eternal Sunshine of the Spotless Mind I was never too excited about his new one. This may be because I knew it was his first feature-length writing effort, and was concerned his writing abilities wouldn’t be quite as strong as his visuals. 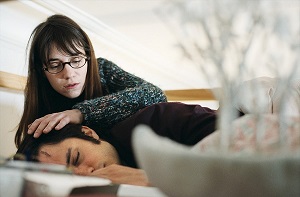 It turns out that The Science of Sleep is better than I had feared, though still disappointing. The script is for the most part top-notch, with some beautiful characterisations. That Gondry managed to make a dork out of Gael García Bernal deserves a standing ovation. Bernal’s Stephane bears no resemblance to the suave, sexy young man we’ve seen before, and his social ineptitude is highlighted by the fact that his French is delightfully awful. Charlotte Gainsbourg plays Stephanie, the girl next door, though there’s nothing typical about this romance. Her steadfastly platonic interactions show us how comfortable she is living in the shadow of her sexier, more confident friend Zoe (Emma de Caunes). The dance of Stephan and Stephanie is beautiful, frustrating and true to life.

To make matters more complicated (and Gondry-esque), Stephane has a habit of letting his dreams take over his waking life. The film constantly shifts between awake and asleep and before long even the mundane becomes magical. Taking magic realism to a new level, The Science of Sleep is at times more disorienting than Eternal Sunshine. Felt horses ride forested boats across cellophane seas and Stephane fights off his co-workers with his enormous yet useless hands and all the while he’s hosting a television show within an entirely cardboard set inside his head.

The regular interactions between Stephane and Stephanie are so believable and beautiful that at times I felt the bizarre moments to be a little distracting. Their tale is strong enough to stand on its own. Unfortunately as the film goes on the main duo’s eccentricities become more annoying than cute. Stephane’s childlike behaviour becomes irritating and Stephanie’s conflicting reactions become infuriating. This is of course all very lifelike and believable, but not what I wanted. Nevertheless I have to respect that Gondry does his own thing, rather than bowing to the wishes of audiences or studios.

The Science of Sleep is a bold and original film, but doesn’t quite reach the near-perfection of Gondry’s previous feature.

The Science of Sleep