James Mangold’s Walk the Line wisely chooses to focus only on a short portion of Johnny Cash’s life. All the predictable musician biopic moments here: the repercussions of a childhood tragedy likely to stay with our lead character for the majority of the film, we witness those tentative first performances, and we see some of the songs we’ve all come to love being written – but thankfully these are kept to a minimum. Instead the focus is really on Cash and June Carter’s romance. This ‘unconventional’ love story (for Hollywood, that is, not real life) is rather staccato in rhythm and seemingly heading for disaster at every turn. Despite this, I desperately wanted the two leads to get together, even if it seemed the wrong thing for them to do.

Joaquin Phoenix (The Village) delivers a powerful and brooding performance, though I would expect nothing less of him. The Cash in Walk The Line is wonderfully contradictory: on stage he’s a down on his luck battler who’s had it rough; offstage he seems to be stubbornly putting as many obstacles in front of him and his career as possible. He’s at times selfish, pigheaded and stupid, but this is part of what makes him such an individual and memorable character. Reese Witherspoon (Just Like Heaven) as June Carter is the perfect foil for Cash, and nothing like him whatsoever, which in a perverse way is what makes them so right for each other. It’s about time we saw Witherspoon in something other than a crappy romantic comedy, and she shines here. Up and comer Ginnifer Goodwin (Win a Date with Tad Hamilton!) is fantastic as Cash’s wife, as gradually both the role and the person get pushed to the sidelines as Cash blunders his way into celebrity. (And, as a small aside: ‘Buffy’ fans will recognise Larry Bagby, who played the Sunnydale High bully in the first few seasons as Cash’s bass player, Marshall Grant).

Biopics are at their best when they can entertain both types of viewer: those who have no knowledge of the main character, and those who have had a passionate interest in their life. As one of the former, I was captivated by this film. In fact I was compelled to go out and buy a Johnny Cash CD after the screening. This succeeds in a way Ray never did for me. Both films featured brilliant central performances, but Ray had a tendency to moralize and tried to encompass too much of Charles’ life.

Walk the Line never gets preachy, and whilst I know nothing of the real Johnny Cash, Mangold seemed determined to never add a glossy shine to proceedings. This is not a ‘rags to riches’ or even ‘triumph against adversity’ story, and thank heaven for that. This is a tale of a rugged and at times self-destructive man who offered the world a type of music previously unheard.

Following on from the success of the Oscar winning Ray in 2004, comes another musician biopic that follows much the same path – introduce the musician, inform us of a life-altering childhood tragedy, show his progress on the charts, the ups and downs of drugs and women, before achieving final salvation. Walk the Line manages to distinguish itself however, with remarkable performances by its two leads, wonderful musical arrangements, and a tighter plot focus. 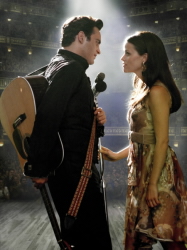 That Joaquin Phoenix and Reese Witherspoon sing all the tracks performed within this film is worthy enough of comment – if one remembers the fuss made about Jamie Foxx learning to play Ray Charles’ pieces on piano for Ray, but lip-synching the vocals, their skill in interpreting Johnny Cash and June Carter for the screen is all the more worthy. That they do so with gusto, enlivening the occasional flat moments in the story with their exuberance, is the true measure of their success.

Their brilliant vocal performances should not in any way overshadow the strength of their dramatic turns. Both major stars are brilliant, with nary a note missed. Witherspoon in particular is astonishing, given her recent career trajectory has included romantic comedies and sequels to earlier successes, it is hard to remember her leads in Pleasantville and Election stamped her as a major future star. Recapturing some of her earlier magic, she is wonderful in Walk the Line. (A fact well-recognised by Hollywood award-givers, Witherspoon having already won several major awards, and nominated for an Oscar).

Phoenix also is amazing, although discerning viewers will have long known his ability. His Cash is tormented by the past, driven by its rejections toward something, although he seems not to know exactly what, and Phoenix gives every action the intensity such a presence requires. This Cash is magnetic in the way so few real-life people are.

The decision to focus much of the ‘bio’ portion of this ‘pic’ within a mere ten year period in the 50-60’s, albeit with scattered earlier scene-setting moments, allows more time for focussing on what the screenwriters felt was most important of the Cash story – his early relationship with June Carter, the woman he would remain married to for over thirty years (until her death in 2003). Mention has been made elsewhere of the life moments left out of this film, but given the involvement of John Carter Cash (their son together) as executive producer, and that the primary sources for much of the writing were Johnny Cash’s own books, ‘The Man in Black’ and ‘Cash: An Autobiography’, it seems likely the general tenor of their lives has been adequately represented. While the choice of certain scenes is undoubtedly manipulative, the end result is a moving account of the redeeming power of love.

Walk the Line is certainly one of the better films of the biopic genre; the music is exciting, the performances are everything you’ve heard, and given the incredible presence of the two leads, the result is a film that is powerful and moving. Brilliant at times, and never less than great, Walk the Line is highly recommended.