The good news is that it’s much, much better than its predecessor… which of course means that this film is merely ‘bad’ rather than ‘atrocious’. Like the original Underworld, Evolution is supremely stupid, with a decidedly lacklustre script, but this time around it at least has some kick arse action. There is less of a reliance on automatic firepower, and thankfully this time Selena gets to use her vampiric skills to impressive effect (it never made sense in the original – everyone had super powers yet only ever ran around firing guns… badly). The three positive aspects of the first film – the set design, cinematography and costuming – are great yet again, and it’s a pity that this film looks classier than Blade II, yet isn’t even half as enjoyable.

Believe it or not the audience applauded during the closing credits, so there are a lot of die hard Underworld fans out there. It’s a pity that such a high concept franchise (vampires versus werewolves) writes itself into such a small space almost from the word go, instead just trying to find an excuse to move things along to the next fight scene.

It could have been worse. Which is more than I can say for the original.

After finding the first in this series to be a pretty awful combination of style and no substance, I held almost no hope for the second. In spite of that, I was completely underwhelmed by Underworld: Evolution.

Following on rapidly from the events of Underworld, Evolution would be almost impossible to follow without seeing its predecessor. That being said, it is almost impossible to follow having seen its predecessor! The ‘plot’ is bizarre – a mix of mythology and mystery that makes no sense whatsoever, and seems to lead one to a denouement as nonsensical as the journey. Throw in a couple of straight-from-the-eighties, soft-porn-for-the-sake-of-it, moments to ‘spice’ things up, and some poorly shot, lit and edited action sequences, and there is very little redeeming at all in this feature. 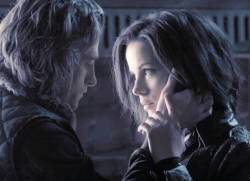 From the first until the last, all of the fight scenes are near-unwatchable – the combination of the genre restraints (no daylight to allow us to see anything, black leather as clothing of choice), and stylistic decisions (rapid-fire editing to match the weaponry), mean that it is genuinely a strain to try to watch. Lycans and vampires fly across the screen, barely glimpsed, with guns blazing and water splashing, and much of it makes no sense at all.

Kate Beckinsale fills her costume well, and again her physical appearance is one of the only things going for this film. Scott Speedman gets to spend more time with his shirt off, demonstrating the value of personal training, but really none of this makes up for our total lack of investment in their characters or plight. For much of the 105 minutes I was frankly bored.

The supporting cast, lead by the irrepressible Bill Nighy sporting a curious accent and including Sir Derek Jacobi in a complete waste of his time, never really make an impact – we never know or care anything about them. Again, this lack of a relationship between the characters and the audience means their success or failure is meaningless – surely some level of interest in the outcome is desirable?

Eventually, it all works out for the best, those apparently the ‘heroes’ of the piece win (allowing them to have more soft-focus sex, I’m sure), and we are left none the wiser as to what it all means. Sadly, it seems likely another installment will add to the confusion.