Would you believe I watched this film straight after watching House Of The Dead? (When I say ‘watching’, what I actually mean is ‘fast forwarding through’ House Of The Dead.) Guess what? It’s really quite depressing to see two shit films in a row.

I had been warned about The Sweetest Thing on several occasions, I must admit… but I was trying to find a fifth weekly at the video store so I could get the cheap deal that was on offer. 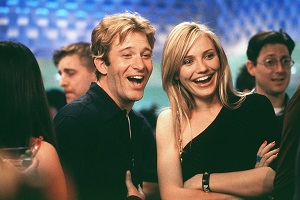 From the trailer, blurb and making-of documentary you get the feeling that this was supposed to be a huge step forward for feminism, or at the very least some kind of female version of American Pie. Well, I’m not too sure if that is the case. American Pie worked because it poked fun at the main (male) protagonists who ran around doing stupid things, whilst most of the female characters were quite sensible in comparison. In The Sweetest Thing men are still portrayed as being stupid, as well as the women, so it doesn’t quite work as well. I’d like to hear a female perspective on this film, because I’m probably not in the best position to judge what is a good example of ‘new millennium girl power’ (this is the description on the blurb).

The sad thing about this film is that Cameron Diaz, Christina Applegate and Selma Blair are all fantastic actors, but unfortunately the director has exercised no control over them whatsoever. They are often completely over the top and in their own little worlds, barely paying any attention to what the other is doing. I have never seen a film with so little direction.

It’s a bad sign when you look forward to the scenes with Thomas Jane in them. He is actually credible in this film, as is (the always fantastic) Parker Posey, who outshines all of them in her miniscule role.

What’s even more depressing about The Sweetest Thing is that there are moments that would be quite funny if they weren’t surrounded by such crap. Really the only part where I almost giggled was during the bloopers in the end credits.