Vantage Point is a high concept film that doesn’t really stick to its guns. Set during an international summit to combat ‘global terror’, the film essentially focuses on the same 20 minutes again and again, each time following a different character. It’s important to note that this isn’t a Rashomon-style outing, however – these aren’t personal retellings and are thus objective rather than subjective.

The US President (William Hurt) is making an historic speech in Salamanca, Spain when he is shot by an unseen assassin. The first segment focuses on the news crew covering the event, helmed by Rex Brooks (Sigourney Weaver), which is a clever way to open. We witness the proceedings for the first time well removed from the action. It’s interesting to note that Rex at one stage reprimands a reporter for injecting her own opinion into the report. The woman responds curtly that Rex expects her to ‘dumb it down’. That’s exactly what this film does. It apparently started as a script for the ’24’ movie, though even the sell-out, increasingly disappointing recent series of ’24’ wouldn’t tell a story quite so simplistically.

The twists are between mediocre and non-existent, and whilst I enjoyed the repetitious nature of the film (always rewinding to follow a different character through the same 20 minutes or so), the audience groaned every time the clock appeared on the screen, heralding midday and the start of another retelling.

The concept is a limiting one, and no easy task to write. Each mini-film has to include some new information, and not spend its time going over old ground. Vantage Point only partially succeeds in this department, and towards the end ignores the framework completely.

All that being said, the film’s pretty enjoyable in a brainless kind of way. It’s incredible – you inject a car chase with some snappy editing and a score reminiscent of the Bourne movies, and suddenly you have an exciting scene. Of course, this has none of the grittiness of that franchise – most of the time it looks like it was made for television, with its primary colours and overall ‘clean’ look. Dennis Quaid, Matthew Fox, Forest Whitaker et. al. make up a rather dull ensemble, but their characters don’t have enough time to grow (or even be established, really), since the film’s in such a hurry all the time.

In deciding to write a concept movie, there is one simple rule that constrains the writer(s) – stick to the rules you define or fail. Unfortunately, inadequate adherence to this rule is what dooms Vantage Point.

Opening in a town square in Salamanca, Spain, a crowd has gathered to hear the opening speeches of a World Leaders’ Summit on combatting global terrorism. An outside broadcast crew led by Rex Brooks (Sigourney Weaver) is covering the event, with multiple cameras trained on the crowd and the stage, while talking heads pontificate on the importance of the summit. 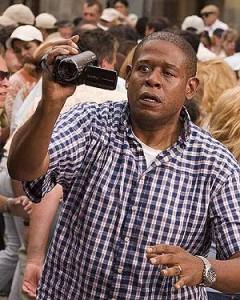 US President Ashton (William Hurt) steps to the podium and is immediately shot by unknown gunmen, creating havoc for reporters and crowd alike, and the Secret Service response is led by Agents Thomas Barnes (Dennis Quaid) and Kent Taylor (Matthew Fox). Their first priority is to capture the would-be assassin, but with so many possible suspects where should they start?

The conceit is that the audience is shown the proceedings from one point of view, and then the film winds back 23 minutes to start again from another character’s viewpoint. This is to be repeated with a gradual release of new information about various players to build finally to a confrontation and resolution. For the most part this actually works, with each vignette adequately covering old ground while still seeming fresh due to the new information presented. That the formula is recklessly abandoned for the final act is a real shame, particularly when it seems it is replaced by yet another miserably shot car chase sequence.

Most of the cast are constrained by their opportunity to appear only in other’s storylines, and with such limited dialogue and screentime often fail to make an impact. The most disappointingly under-utilised is the wonderful Israeli actress Ayelet Zurer, who manages to steal attention away from the main stars in most of her scenes. With a similarly neglected character in Munich also behind her, she must wonder whether she will ever obtain a role of substance in an American film.

As others have mentioned, the story is very predictable, and the lack of a real twist does more damage after the novelty of the conceptual artifice has worn off. That the only plot turn even remotely resembling a surprise is entirely ruined by the trailer is a shame, as perhaps without seeing that irresponsible piece of marketing the film may have had more impact.

With its pretense at being insightful about terrorism as the final insult, it is hard to describe Vantage Point as anything other than a glossy attempt at a thriller that fails to realise its strengths or beware its weaknesses, and thus reverts to the generic.

←The Eye The Black Balloon→