So whilst the Pang brothers went across to the US to make The Messengers, the film that presumably got them the gig, Jian gui, has been given the makeover by Hollywood. 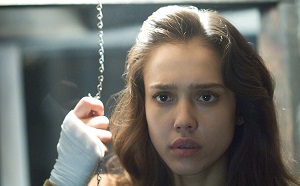 Turns out this remake sticks pretty close to the original. Despite being a Hong Kong film, Jian gui had a lot in common with J-horror, at least stylistically. We have the same scares, the same sort of effects. Hollywood hasn’t really twigged that it’s getting a bit old, so such remakes are still petering through. Writer Sebastian Gutierrez has made some changes to the script, though they are minimal, and they perhaps smooth out the narrative a little. He had a chance to make more of the premise, however. There’s no subtext to The Eye, despite the fact that it would be fertile ground for just that.

Sydney Wells has been blind since a young age. At the beginning of the film she’s given a whiz-bang operation that replaces her damaged corneas with that of a donor’s. Of course, soon after the operation, she begins seeing things that… well, she shouldn’t really be able to see. There are moments that suggest the film will explore some interesting territory – it seemed that something would be made of Sydney and her sister Helen’s (Parker Posey) history, but nothing transpires. Posey gets very little to do apart from try and be supportive, all furrowed brows and concerned looks. Dr. Paul Faulkner (Alessandro Nivola) – who, in the tradition of all horror supporting characters, doesn’t believe Sydney’s tales of wacky woe – suggests that she’s having trouble adjusting to the fact she’s now just like everyone else. Such narrative points could have been expanded upon, and perhaps made the film that little bit more interesting.

As it stands, the main flaws of The Eye are the same as the original – the premise may be enticing, but the story itself is pretty humdrum. The scares are decent – and often shot for shot the same as the Pang brothers’ original scenes. At least it doesn’t get too caught up in special effects like The Ring remake did.

The performers are fine, but there’s nothing particularly special about The Eye. It’s competently made, but unfortunately a little dull.