Yet another crap film I wasted my money on in the Melbourne International Film Festival. Not to bag the festival, it just seems I had rotten luck this time round, excepting the incredible Sword In The Moon (Cheongpung Myeongweol). 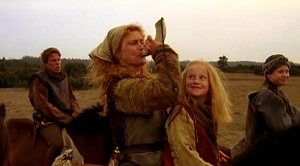 Three Suns tries to be a sweeping historical epic (and feminist film to boot) but fails for the most part. I appreciate that they tried to do a lot with little money, and there are certainly some beautiful images, but the humour is distracting at times, and the emotional moments seem a little too forced.

I think the main problem with this film is that the story simply isn’t interesting enough. The pacing was a little too carefree, and scenes dragged on for as long as they needed to get the lines out. To have had a more succinct script to start with would have been preferable.

There were many similarities between Three Suns and The Navigator: A Mediaeval Odyssey. But, to be frank, Vincent Ward’s film beats this hands-down. Plus The Navigator had much better buboes. That’s right, Three Suns has got bad buboes – not very realistic at all.

Some of the logic behind the characters’ motivations was a little strange, and the ending predictable. On the whole, quite disappointing.