I’m not as attached to the James Cameron Terminator films as some. The first two are indeed classics, but I haven’t rewatched them in years. In fact, I’ve seen T2 so many times that I don’t feel the need to watch it again any time soon. So perhaps that explains why I enjoyed Genisys a lot more than others out there. 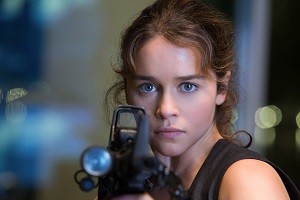 This fourth sequel takes the alternate timeline route (much like ‘Terminator: The Sarah Connor Chronicles’ did) and let’s face it: that was really their only option. The idea of The Terminator as a franchise has been problematic since the final moments of the first film – it’s all time loops and paradoxes – which severely limited where any sequels could go.

Genisys has the gumption go right back to the beginning, meddling with the events of the first film. And I have to say that the first 20 minutes had me glued to my seat. There’s a lot of surprises, retconning and retooling going on, and some nifty variations on what came before. Not having seen the trailer most definitely worked in my favour.

I actually have zero complaints about the story presented here. It’s inventive, it provides a nice spin on the franchise and it changes the chemistry between the characters in the same way that T2 did back in the day. The dialogue, however, is a different story. There are a tonne of awkward lines that tumble out of the actors’ mouths, usually at a completely inappropriate moment. It’s like the script needed a last minute dialogue pass.

Jai Courtney and Emilia Clarke do an admirable job as Kyle Reese and Sarah Connor, though both have been better in other projects. Do they resemble their counterparts from The Terminator? Not really. But I think it was better they attempt their own interpretation rather than trying to mimic the original actors.

Arnie is…well, he’s present. Since his return to acting, he’s been rubbish in every film of his I’ve seen, and it’s the same here. Obviously, he was never the world’s most accomplished thespian, but he can’t even manage the limited range he used to do so well back in the day. The film doesn’t give the T800 much to do, to be honest, but considering his abilities, maybe that isn’t such a bad thing.

The visual effects on show are consistently disappointing. I think part of the problem is that they’re attempting things that simply cannot be achieved with visual effects in 2015; their reach exceeds their grasp. 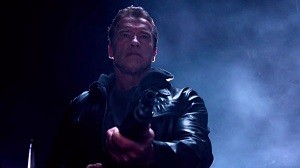 Secondly, they don’t seem overly concerned with the laws of physics. There are a number of moments that simply seem unbelievable – the most significant of which is a helicopter chase which borders on absurd. Thirdly, unlike T2 back in the day, this isn’t the most expensive film ever made, and $155 million simply isn’t enough for what they wanted to achieve.

Lorne Balfe handles soundtrack duties with aplomb. I’m already a fan of his ‘Assassin’s Creed’ work, so enjoyed the new stuff he brought to the table. When he resorts to the Terminator theme we all know so well, however, it doesn’t work. It feels like an obligation, rather than something that actually suits what’s happening on screen.

Terminator Genisys most certainly entertained me. It’s a B-grade action movie, and the twists to the Terminator meta-narrative are entertaining, even if it means a there’s a tonne of exposition to get through. With regards to the action, it seems to think that “more is more”, and throws everything at the screen. It’s definitely better than Rise of the Machines and Salvation, but of course can’t hold a candle to the first two films.