Ted 2 is, in my opinion, one of those rare sequels that improves upon the original. Don’t get me wrong, this isn’t a classic piece of filmmaking, but this time the laughs are joined by a stronger narrative. 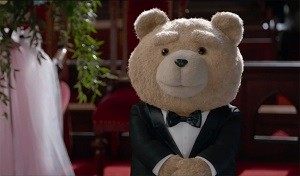 The film opens with the marriage of Ted (Seth Macfarlane) and Tami-Lynn (Jessica Barth). Whilst the newlyweds are clearly head over heels in love, they soon run into a legal complication when they attempt to adopt. What follows is a weirdly on-topic (or even a little out of date) story about institutionalised prejudice and one bear’s fight for legal rights.

The good news is that Ted 2 actually provides a decent role for the female lead. The first film featured a lame and clichéd plot which basically required Mila Kunis to complain about perpetual man-child John (Mark Wahlberg) and his inability to grow up. In the sequel, Amanda Seyfried gets to play Samantha, a young lawyer who was clearly top of her class, yet also a pothead with a bizarre lack of pop culture knowledge. I’m not saying that Ted 2 has suddenly fixed Hollywood’s under-representation of women, but at least the film gives Samantha a bit of depth.

For the most part, the humour works a treat. There may be a dozen jokes that fall flat, but there are easily four times as many that strike the right chord. Macfarlane’s usual “was-that-so-cutting-edge-as-to-be-offensive?” shtick is present and accounted for, and the gags don’t impede the progress of the narrative. Ted himself looks just as good if not better than in the first film, and the fact that Walter Murphy’s score plays it straight works a treat.

Shortcomings? Well, there are a few too many useless cameos that take me out of the film. There’s also the fact that Wahlberg still isn’t the best comedy actor in the world. I know that, for the most part, he’s playing it straight, but when it comes to over-the-top antics, it never really works for me. The charisma’s there but his timing leaves a bit to be desired.

With plenty of laughs, Ted 2 is a decent enough use of 115 minutes. The female lead has more to work with and the overall story is stronger too. Fans of the original should definitely enjoy it.

←Inside Out Terminator Genisys→