When it comes to movies that can shock an audience with depictions of apalling mistreatment of others, films that choose fanatical religion and its vices as a subject are often the most moving. I found the 2003 Afghani film Osama horrific, and now joining it is another based-on-a-true-story film about fanatical Islamism, Stoning of Soraya M., The

When a French-Iranian journalist’s car breaks down outside a small town in rural Iran in the period soon after the ascent of Ayatollah Khomeini in the mid-80s, he surely isn’t expecting to become the confidante of an Iranian woman with a pitiful story to tell. As he listens to her tale, he will hear about evil men and innocent women, and the effect of Sharia law on their relationships and on village culture as a whole. For when it comes down to it, the custom that a woman must prove her innocence while a man must be proved guilty can lead to only one outcome.

There can be no more powerful sequence in a film of this sort than the stoning foreshadowed by the film’s title. The twenty-ish minutes of abhorrent physical and psychic torture that Soraya experiences are bound to make many viewers physically unwell. Perhaps it is the intention of director Cyrus Nowrasteh to ensure no audience is left misunderstanding the reality of such an event, and this goal is successfully achieved: the mechanics of the ordeal and the bizarre way in which the barbaric is intermixed with allusions of due process and civility is utterly shocking.

The leading performances of Shohreh Aghdashloo, Mozhan Marnò and Navid Negahban are all spot on, with Aghdashloo using all of her experience to deliver a moving portrayal of a woman reluctant to face the inevitable. Marnò allows her turn as Soraya M. to show both defiance and defeatism, and when Soraya sees the betrayal her husband has caused in her sons, the audience cannot help but be heartbroken. Negahban’s Ali is the personification of uncaring and offhanded evil, although perhaps his character could have been allowed a little more depth: as it stands, he is close to a uni-dimensional monster.

Occasional moments in which Nowrasteh has chosen a ridiculous camera angle or shot diminish the sense of being on the outside and peering in on actual events, and, although they are few, they threaten to add a layer of artifice to the story that would not do it justice. The dénouement featuring a silly game of cat-and-mouse also fails in the fundamental task of bringing this story to a close without diminishing the reality of what is depicted. In this respect I agree with Roger Ebert. The arrival of a band of outsiders mid-stoning also seems bizarre and unneccessary – unless the director felt his audience could not stomach any more of his pivotal sequence.

While watching Stoning of Soraya M., The is a truly devastating experience, it is an experience worth having. That any culture could practise such savage and barbaric acts must dismay the more moderate of its members, and the greater human society as a whole. Highly recommended, although with the caveat that if depictions of realistic and brutal violence turn your stomach, skip the candy bar.

As one would imagine, The Stoning of Soraya M. does not make for a pleasant viewing experience. The title says it all, really, and it is impossible to watch a film like this without a sense of dread.

United 93 may have been a more harrowing experience for me personally – possibly because I had no idea just how graphic parts of the film would be – but The Stoning of Soraya M. is up there with all those films that you can compliment without wholeheartedly recommending (think something along the line of Requiem For A Dream or Dancer in the Dark as a useful comparison). 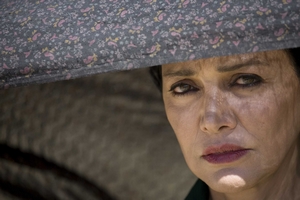 Based on the book of the same name, which was in turn a recounting of a true story told to the author, journalist Freidoune Sahedjam (James Caviezel), when his car broke down in a remote Iranian village in 1986. Whilst his car is being repaired, Zahra (Shohreh Aghdashloo) tells him of an atrocity that occurred only yesterday, a conspiracy between several of the most influential men in the village.

I was quite conflicted when watching this film, unsure of the purpose behind its creation. If the intention was to inform, I knew that such activities occurred and still occur in parts of the world, so it didn’t really illuminate in any way. In fact, I was a little surprised that the film treated the occurrence as such a rarity, since I thought it was much more widespread. Of course, this is one of those films where you know the ending to a certain extent, though I suppose that didn’t stop the likes of Apollo 13 and Titanic doing well at the box office, so that isn’t a good reason to not make a film.

Perhaps one slight flaw is the fact that the postscript focuses a little too strongly on the stoning element of the events that took place, perhaps in an attempt to communicate successfully with those who believe in the fundamental laws yet may be swayed on the punishment front. Stoning isn’t the problem, per se – it’s a result of the type of sexual persecution that occurs in sections of society that are clearly godless though would, ironically, profess to be anything but. The lack of a proper judicial system, the complete imbalance of power between men and women and the disconnection such a town has from the rest of the world are the prime factors that lead to injustices such as these occurring.

The film itself is beautifully made. It is shot, edited and directed perfectly, and the performances, particularly of Aghdashloo – who has quite a varied resume, also including ’24’ and X-Men: The Last Stand – is great in the lead role. Mozhan Marnò clearly has the most demanding role as Soraya herself, and the climactic scenes of the film are perfectly shocking, as they are intended to be.

The Stoning of Soraya M. is a stunning indictment of a practice that extends far beyond that one event. Considering that enduring a film like this is such hard work, however, it’s hard to profess that it is a ‘must see’ feature.

←City Island The Secret in Their Eyes→

The Stoning of Soraya M.