Sometimes The Academy of Motion Picture Arts and Sciences gets things horribly, horribly wrong – their decision to award an Oscar to Sandra Bullock for her lead performance in the close-to-atrocious film The Blind Side is a great example of their frequently apalling taste – while on other occasions they manage to get one or two things right. While several of the other nominees in the 2010 Foreign Language Film category are yet to screen in Australia, they would be hard pressed to be better than the film awarded the golden statue, The Secret in Their Eyes (El secreto de sus ojos). 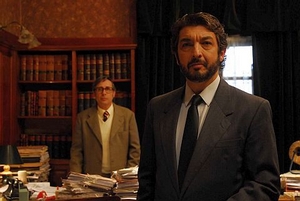 His announcement that he will be writing a fictionalised version of an unsolved rape and murder case from their earliest days of working together, however, is not such happy news. His gradual unravelling of the past will be told in parallel with flashback sequences that suggest a richer personal history for these two characters than their current lives would suggest, set against the background of the political turmoil (and what some have called ‘genocide’) that overtook Argentina in the mid-1970s.

This film is a rather remarkable and wonderful exploration of the effects of love that lasts a lifetime. The juxtaposition of stories and eras allows the full effects of the characters’ relationships to be explored, and the relative success in dealing with what life serves up is also cleverly examined. Esposito’s novel provides the spark for much reflection, and it may be only in reviewing the past that he can recognise and correct its mistakes. When wrapped up in a mystery thriller with political overtones and then provided with a surprisingly effective resolution, The Secret in Their Eyes becomes one of the most enjoyable films we are likely to see for the year.

There is a degree of attention required to follow the frequent changes in time, however audiences will be so familiar with this narrative technique by now that it will hardly stretch most viewers. The way that director Juan José Campanella handles the two time-settings is deft, and the use of the same actors for all major roles in both eras makes following the activity generally quite easy. Perhaps the only flaw is in the makeup department: while lead actors Villamil and Darín both look the part irrespective of which decade they are supposed to be in, Pablo Rago suffers from a rather awful attempt at making him appear older for the later sequences.

The film assumes knowledge of the events in Argentina in the 1970s, and might remain somewhat elusive for foreign audiences who won’t have directly witnessed those troubles. This is something of a shame; while an explanatory voiceover certainly would have diminished the film’s effect, a more complete understanding of the era could well enhance it. One wonders how cinemagoers outside of Argentina will find it when compared with its natural audience.

Campanella’s characters are wonderfully developed with shades and depth that make enjoying their company a treat, while his actors support his vision with adroitness. Darín is particularly wonderful as Esposito, and Villamil is utterly charming as the one that got away. They are supported by a strikingly accomplished turn from Guillermo Francella, while Rago overcomes the difficulties with his makeup to form the devastating heart of the story.

The Secret in Their Eyes is moving, and occasionally shocking, and knows just how long to linger lovingly on its finely drawn characters and their story without overstaying its welcome. Bravo.

The Secret in Their Eyes