Mark loved this film. Absolutely adored it. He thought it was the best film he’d seen in the last five years. At one stage I turned to see that he had covered his head with a blanket. I asked why he was doing this and he replied, with feverish fervour, “I can’t watch it… it’s too good! I’m afraid if I look it will be over and I never want it to be over. Never!” When the film ended I had to wrestle the controller out of his grasp lest he start it again. 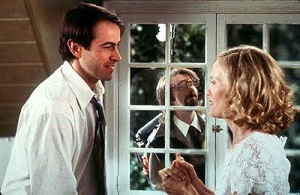 Yes. Well. I’m not sure what I expected from Stealing Harvard. It’s another one of those god-damn ‘adjective, proper noun’ films, which are starting to really get on my nerves (Finding Forrester, Saving Private Ryan, Drowning Mona etc…). Why can’t anyone come up with a different title?

The premise of Stealing Harvard isn’t so bad – better films have been made with worse ideas, but the execution is terrible. Sure, the script isn’t so great, but there are a couple of good (and funny) ideas there. I think part of the fault lies in the direction – the actors didn’t seem to know exactly how over the top to play it. As a consequence it feels like everyone is doing their best to try and be funny all at once. This rarely works, and the only film in recent years that I can think of that did succeed this way was Super Troopers.

Lee and Green manage alright, but the supporting characters are terrible. Firstly I don’t understand how on earth we’re supposed to like Elaine (Leslie Mann). From the very beginning of the film she’s annoying, and only towards the end does she get to actually have some fun. In fact I’m of the opinion that Emma Caulfield from ‘Buffy’ would have played the character perfectly. Dennis Farina’s also annoying. His character has been done so many times before and is basically an inferior version of Robert De Niro’s from Meet The Parents.

It’s when the comedy fails that you start to have trouble with plot inconsistencies in this type of film. There are holes all over the place (of course), and with nothing to laugh at you’re left staring at these flaws.

The best I can say about Stealing Harvard is that it’s better than Starsky & Hutch. Mmmm, quite a complement, eh?