Having missed its cinema run, I saw this film rather belatedly (posthumously?), and thought I’d better review it before the rental release here in Australia. 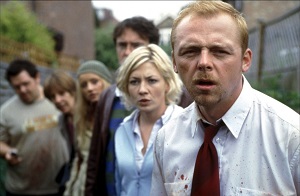 There’s been a lot of zombie films in recent years, so it’s with some trepidation that I sit down to watch another one. Thankfully Shaun Of The Dead is fantastic. Not only does this film stay funny for its entire length (a rarity in comedies), the story is involving and the acting is fantastic. The byline ‘A romantic comedy. With zombies’ is a bit of a mislead. This isn’t a romantic comedy that happens to contain zombies, but well within the realm of the zombie genre (which is fine by me, considering how badly Dead Creatures played with the genre).

Every one of the actors were dead on with their performances. On paper I’m sure Ed simply seemed to be yet another ‘funny fat guy’ but onscreen Nick Frost was hilarious, from the big slapstick scenes to the subtle nuances. Simon Pegg is great in the lead also, and provides a wonderfully detached anti-hero who does his best to be a good guy.

The set-up of zombie infested England is subtle yet hilarious, and thankfully very little time is spent on exposition (we all know what zombies are and how to kill them from years of cinema-going experience). The production values are great – the zombies look impressive and the special effects awesome without being pretentious.

Most importantly there’s heaps of character humour to go along with the slapstick. This kind of humour leaves one more satisfied than the simpler jokes in Undead. Shaun Of The Dead is one of the best zombie releases in recent times, and hopefully will herald the end to the genre for at least half a decade or so. (We’re all getting a bit sick of them, aren’t we?)

←Wondrous Oblivion The Passion of the Christ→

Shaun of the Dead