I think it is important to always attempt to rate a film on its own merits, in isolation from the historical and/or sociological implications that have come before. Of course that’s always going to be hard with a film like this.

I did enjoy this film, however I suffered from a detachment in a way the rest of the audience seemingly didn’t. There is a lot that is assumed about the audience. I myself was raised pretty much in ignorance of the whole um, ‘religion’ thing. Sounds silly I know, but understand that there is very little I know about Christianity. Thus I expected that much of the film would go over my head, or that I would be oblivious to various subtle nuances. 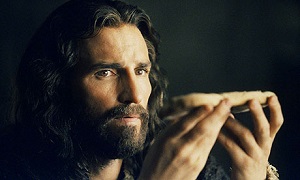 This wasn’t so much the problem. The problem was that I never really felt a personal sympathy towards the main character. It may sound strange since a whole host of horrible things happen to him, and yes, I felt sorry for him as I would feel sorry for anyone in his position… but that was about it. The film focuses so much on the last 12 hours of his life that much of the stuff that went on before simply isn’t dealt with. I don’t feel that the film ever really explained why he was such a great person. All I saw was a man getting beaten and killed.

Yes, it was occasionally harrowing – although I must admit that I have been reasonably desensitized to screen violence – and it looked and sounded great. The acting was all good and there wasn’t much in evidence to complain about, it was just the absence of characterisation that let it down for me.

Now if you already know the story, have read the book, then maybe this film is useful in driving home (all nine inches of) the brutality that the dude suffered, and his irrepressible spirit.

The Passion of the Christ