For the months leading up to the release of The Sentinel I had it in my head that this was the ‘Michael Douglas versus Kiefer Sutherland movie’, and I’m sad to say that this rather simplistic categorisation is much more exciting than the film itself. 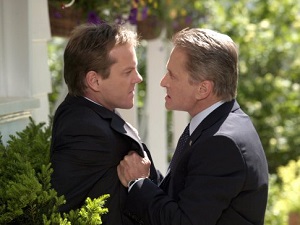 At the time it was fine: it adequately filled 107 minutes and never once became sluggish. But then that afternoon I started to think about the film, and discovered plot hole after plot hole. There is a lot of The Sentinel that doesn’t make sense really, but everyone’s so damn sincere that they manage to obfuscate the fact that this is a very silly film.

Kiefer (River Queen) is in fine form here, and I was very impressed David Breckinridge wasn’t simply a carbon copy of ’24’s Jack Bauer – ie: I actually felt I was watching a saner, less homicidally-inclined investigator. Michael Douglas (You, Me & Dupree) plays the same character he’s done for years now, though it makes me uncomfortable when the lead is so old they feel the need to show him exercising to prove that he’ll be able to run about later on. Kim Basinger and Eva Longoria both do their best in limited roles. Actually, everyone’s held back in a film like this.

The main problem is we’ve seen it all before, and better. At least in The Fugitive the main premise was underway quickly – here we have to wait over half an hour to get to the hook that was pronounced by the media campaign. The most important twists can be seen coming a mile off and the resolutions don’t do the setup any justice whatsoever. To top it all off the editor seemed to feel the need to feature a number of horrid wipes at the end of scenes!

All that being said, I still enjoyed it. At the time. Wait for DVD.