The Dardenne brothers’ The Child is a heartbreakingly realistic account of a young couple living in an eastern Belgian steel town. Eighteen year old Sonia has just given birth to Jimmy, and from the moment we meet his father, Bruno, we know there’s something not quite right about this young man. He seems alternatively distant and loving towards Sonia, and disturbingly sees less than a week old Jimmy as an opportunity rather than a son. 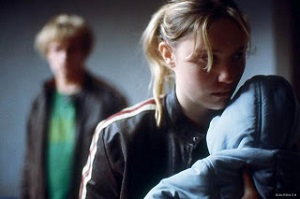 Jérémie Renier (Bruno) and newcomer Déborah François (Sonia) are superb, and this is the type of film where you have to keep reminding yourself you’re watching actors, not a true story. The handheld camera and super-long takes add to the drama, and the film never becomes dull.

Bruno is a frustrating fellow to watch. Whilst the film follows him over a series of days, it’s an objective rather than subjective analysis. His rather extreme actions are never explained, and his motives remain a mystery, especially when he is constantly backtracking and reversing his decisions. I wanted to know why he is the way he is, but the film employs a ‘fly on the wall’ technique that never allows us inside his head. To top it all off he’s a man of few words, so even his friends and acquaintances fail to get answers from him, or they don’t even bother to ask. I actually wanted to know more about Sonia, but unfortunately this isn’t her story.

The Child is a well-executed film, however slightly disappointing. Had I known more about Bruno maybe I could have related to him. As it was I sat transfixed for the 92 minutes, but felt let down by the time it concluded.