Run is the very first Cambodian zombie film ever made, and thus consequently Cambodia’s best ever zombie film. Filmed in Phnom Penh, the unique backdrop is really all the film has to offer those who’ve seen scores of zombie films in their film-watching history. 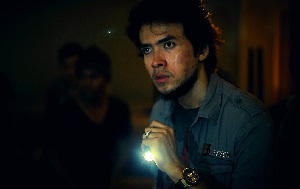 That I saw this whilst actually in Phnom Penh made the setting all the more interesting. As one might imagine, Cambodia’s filmmaking industry is still in its infancy (IMDb only lists 193 films in total), and as such, one must go in prepared for some low-budget filmmaking. And that’s precisely what you get. The image quality varies greatly – some moments look like they’re on par with 28 Days Later…, others look homemade. From the late 90s.

It’s not that hard to overlook the shortcomings of low budget filmmaking – or at least it isn’t something I have trouble with. The one thing that’s really hard to ignore, however, is bad audio production and sound editing. Over the years, I’ve come to believe that this is the most important part of a film, especially in the modern age, where you can capture a perfectly decent image on your smartphone. Alas, Run doesn’t manage too well in the audio department. There are wild shifts in quality and atmos. It sounds like there’s been some ADR work, but not enough, and when there is, the reverb is all wrong.

I haven’t outlined the story, and that’s probably because there isn’t much of one to speak of. A group of teenagers are partying. Zombies attack. They’re the running kind, and it doesn’t take long before the city is decimated, left little more than a ghost town. (Considering what happened in Phnom Penh in 1975, this isn’t handled quite as seriously as one might expect.) There are half a dozen or so main characters, but there are only two that prove interesting. Chun is hopelessly shy and nerdy, and played expertly by Vathanak Seth, who was also on writing and line producing duties. The other standout is the charismatic Lion, who sports facial hair not unlike Jet Black from ‘Cowboy Bebop’. The rest are a pretty forgettable mob of zombie fodder, and it’s hard to distinguish them from each other.

At the end of the day, the low budget shortcomings wouldn’t be a problem if the script worked. Unfortunately, the film lacks even the most banal of structures, meaning that it’s a hodgepodge collection of scenes that don’t flow well at all.

I don’t like to be overly harsh about independent films, but Run was a struggle for me to get through. There are some well-executed moments, and occasionally impressive cinematography, but the film isn’t consistent enough to truly impress.

Run is only screening in Cambodia at the moment, but will no doubt appear on DVD sometime soon.