An interesting film. This sci-fi action fest possibly gets the award for the most number of rip-offs ever. There are glimpses of just about every recent science fiction movie made in Returner, from The Matrix to Final Fantasy: The Spirits Within. That being said, it’s still damn entertaining.

The plot itself is nothing special. The special effects are the type that look great but never suspend disbelief. And the acting is so-so (actually the acting is very much like an anime film, so it’s hard to judge just how good or bad they are). 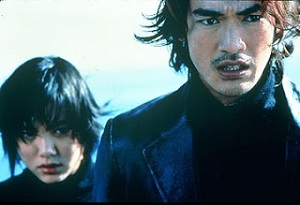 I had trouble not laughing when the star made his first appearance. He looks like he has in fact stepped out of the pages of a manga comic – especially the hair.

There are a couple of moments when this film truly shines, mainly at the very end. These moments seem to rise above your standard Hollywood action fare and become more spiritual in nature. In fact it’s because of these moments (rather than the action scenes) that I decided I really liked this film.

One recommendation – don’t watch the trailer before seeing the film. It shows you everything… and I mean everything.

Sure it’s cliched and derivative. But it’s great fun.

I happened across this film one day in Video-Ezy, and hired it on a whim, not realising it was from Japan and therefore likely to be strange at best. Placing it in my DVD player, the film started with the characters looking like something out of Monkey. Finally it occurred to me that the player had selected an English dub without subtitles. Having rectified that glitch, my experience looked up from there, and it became way less strange! 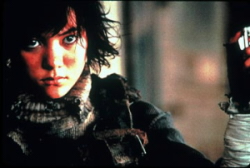 Fun and frenetic, the action is great, and the slightly different feeling of watching some non-Hollywood action for once was refreshing and exciting. And yes, the star has great hair, but he’s also very cool. And his co-star has great eyes (see picture). The minor characters are drawn from the standard Yakuza book of sidekicks, and I felt I could be watching one of many films with similar people, places and motivations. The old lady gun dealer? What was that about?

The finale is awesome, and makes the journey (which was fun but not special in any way) more worthwhile. The SFX is scratchy at times, but wow, what a great climax! The final explanations do clear up a few things I was wondering about, and it does have a clever twist for completeness.

Overall, this is not a great film, but it was certainly fun watching it! For anyone wanting something a little different from the average Hollywood guns and explosions.