After the disappointment of Volcano High I was thrilled with The Princess Blade, one of the many new DVDs appearing in my video store in the ‘Eastern Eye’ collection.

This film is just about as close to live action Anime as you can get. The shots, stunts and pacing of the film reminded me of some of the better Anime flicks I have seen: deadpan delivery of lines; actors doing their best to be ventriloquists (it always seems that they’re afraid to open their mouths); still shots portraying beautiful landscapes; and then some kick arse action scenes. Of course this probably means that these are in fact elements shared by much of Japanese film, rather than just Anime… but for years the only Japanese cinema I saw was films such as Akira and Ghost In The Shell. 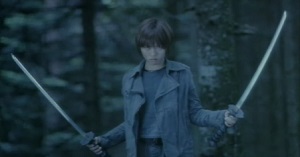 The Princess Blade is a short film (yay!) that did become tedious at a couple of points (boo!), but it was the kind of tedium I always suffer from during Japanese films. I do, however, realise that the silence is important to the feel of the movie, and that some of the most important moments in The Princess Blade are those when there is almost no sound whatsoever.

The action is pretty cool, including a couple of tricky CGI enhanced shots that are shown off in the trailer. I was disappointed at times when the editing got a little too frenetic, and I was left feeling disoriented and cheated a little. This is a problem shared by many Hollywood films also, in that the editor is given the job of hiding the flaws in the action. Vertical Limit was a film that I think set a good example for all other contemporary action movies… during the big set pieces it in fact pulled back from the action and gave us a wide shot so we could actually see what was going on, as opposed to other films which rely on deceiving us with extreme close-ups and quick edits.

Despite the crappy sounding title, The Princess Blade boasts quite a mature story. Hope in the face of adversity runs parallel with the unshakeable undercurrent of despair that is present throughout most of the film.

All the actors are cool, and each have their moments in the spotlight. There are a few instants of utter silliness where a basic understanding of human biology, common sense, or the very laws of physics don’t seem to apply, but these are by far outweighed by the better parts of the film.

The Princess Blade is a very beautiful film, both visually and with regards to the overall tone of the piece. I did at times find myself bored during the quietly emotional moments, but overall was quite impressed.