In terms of big dumb popcorn flicks, Poseidon has to be THE prime example. It’s full of BIG THINGS – a BIG SHIP, a BIG WAVE and BIG EXPLOSIONS. The film doesn’t exactly aim too high, which means that it’s very watchable, if in a mind numbing kind of way. 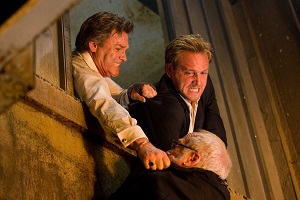 Wolfgang Petersen has never again come close to the classic Das Boot, though in the 90s he did a string of good quality action movies (In the Line of Fire, Outbreak and Air Force One). Alas, recently he’s produced competent but lacklustre films whose mammoth ad campaigns existed in inverse proportion to their positive press (The Perfect Storm and Troy). Here he returns to the water, and let’s face it – he’s in his element. No one can direct water quite like Petersen can. The big wave moment that sets the disaster in motion is a truly impressive sight, even if I’ve been a little desensitised to bad CGI work over the last few years (the majestic opening shot is better than some of the much criticised similar moments in Titanic, but only just).

The actors do an admirable job with a standard disaster movie script, managing to cleverly downplay the cheesier aspects. After a brief reprieve with War of the Worlds, which cleverly went for a smaller cast, we’re back to the obligatory dozen or so characters, some of which we will expect to die before the movie’s over. Kurt Russell (Sky High) and Josh Lucas (Stealth) are the manly heroes of the piece, while Richard Dreyfuss (The Old Man Who Read Love Stories) is relegated to ‘gay stereotype number two’ – we know he’s gay because he WEARS ONE EARRING. Everyone seems to have ‘special skills’ that will enable them to survive this ordeal – ex-mayors are good at ordering people around, ex-firemen know to feel a door for heat, gamblers know how to take chances and apparently architects understand the construction of cruise ships.

It’s all a little stupid but did we ever really expect more? Thankfully the big set pieces come one after the other, so we’re rarely left alone with the dialogue for more than a minute. Plus it seems that Petersen was contractually obligated to include an explosion every seven and a half minutes, so the fact that we’re in the middle of the ocean is no barrier to the threat of big fiery death. Poseidon isn’t deplorable by any means, but don’t rush out too quickly to spend your hard earned dollars.

←The Three Burials of Melquiades Estrada The Chumscrubber→