Just when you thought the traditional Western was dead (Brokeback Mountain came close but was arguably more of a melodrama), along comes a film set in the dusty sun-parched landscape of Texas, where the men are strong willed, taciturn sorts, and the women exist purely as tools for sexual recreation. A steady and inexorable drama, Three Burials moves along at a deliberately sluggish pace as ranch hand Pete (Tommy Lee Jones – The Missing) doggedly fulfils the wish of his deceased friend Melquiades (Julio Cesar Cedillo), which will involve dragging border patrol officer Mike (Barry Pepper) along for the ride. 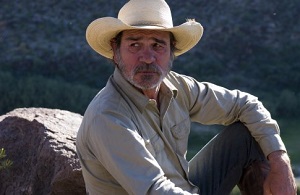 The initially non-linear narrative smooths out soon enough and the extended cast drop out of the drama quicker and quicker until we’re left with just Pepper and Jones. The disparity between the number of cast members in the first and second half of the film suggests that writer Guillermo Arriaga wasn’t too keen to let go of the twisted, multi-narrative forms he utilised in 21 Grams and Amores Perros.

Jones and Pepper are brilliant, but it’s hard to pick a side in a film with such unlikeable characters, ever ready to snap and do something violent. That is of course part of its brilliance – there’s no good and evil in this film, just a bunch of people with very little to do yet paradoxically a lot of time on their hands. Hopefully this will revitalise Jones’ career, which has been flagging a little of late, far and away from the time when he owned films such as Under Siege and The Fugitive.

To the outsider the film almost seems a treatise on US/Mexican relations, and it wonderfully examines the glaring differences (and similarities) of lifestyles on either side of the border. Levels of opportunity and wealth may differ, but when all’s said and done, they’re just people, struggling to survive.

The Three Burials of Melquiades Estrada is a powerful film, full of those western themes – fraternal love, vengeance and general amorality, but for all its admirable traits it is rather tedious at times. Though I enjoyed the journey, it certainly could have been over a little quicker. When the cinematography is so stark (in a bad way), we don’t even get something on which to feast our eyes in the duller moments. The highly determined nature of the characters makes for some fantastic drama, but overall the film fails to make a strong impact.

The Three Burials of Melquiades Estrada