Okay, I love this film. Firstly, it’s a thriller set in an enclosed space. I love thrillers set in enclosed spaces (Cube, Rear Window, Panic Room, The Hole). Secondly, it’s a film where the absence of anything definite counts. This film is all about what could happen – the implied threat is the most important member of the cast, and very little is actually shown. Any film maker that can make you feel something (fear, sadness, apprehension) without actually showing you anything will inevitably receive praise from from me. 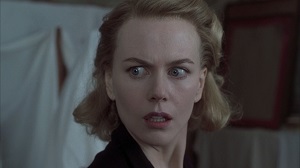 The cinematography is stunning, as is the sound design and lighting. (One particular shot featuring a face (you’ll know it when you see it) is possibly the best use of lighting ever used in a feature film.) The acting was fantastic (especially the kids), and since I don’t have a problem with Kidders, I have a lot less to complain about than Mark.

Basically I loved everything about this film, even the twenty minute setup at the start of the film which practically signposts all the difficulties that will come into play later on.

This film came out soon after The Sixth Sense, and was thus labelled as a copy by many. Admittedly, if I had been told that M. Night Shyamalan had made this film I wouldn’t have doubted it. He and Amenabar’s films do share many traits, and it boils down to the fact that both The Sixth Sense and The Others are traditional ghost stories at heart.

That being said, I have still been scared on repeat viewings of The Others, whereas that didn’t happen the second time I saw The Sixth Sense.

Mark’s gonna trash this film, but pay no attention to him. He’s just sad it didn’t feature his beloved Humphrey ‘I wear old man pants’ Bogart.

A near perfect film.

And so I ask you… what was the point? Yes, I am prejudiced against horror/ghost films, especially when watching them with Stuart, as I always jump and embarass myself. But this film is just a poor film.

In the set-up, every cliche of scary story-telling is met – I found myself wondering if I was mistakenly watching Scary Movie 4! ‘The Others’ feels that much like a spoof to me. Every device in the early stages is there only for the later frights, and it’s a shame that you can see them coming from miles away. Were this film truly like Shyamalan, we wouldn’t know every little twist before it comes.

There are just some truly stupid sections to this film – the husband’s return is the best example. 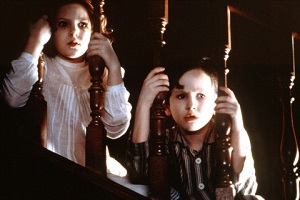 And then there’s our Nicole. Why she gets such great reviews always confuses me. Admittedly, I’ve not yet seen The Hours, but the rest of her body of work that I have seen hasn’t impressed me.

The ending was telegraphed from afar (although I may have heard parts of it when this film originally came out), and it couldn’t come soon enough for me. Whilst there were some good parts – the housekeeper lady was very good – overall this film just didn’t interest me.