There seemed to be a bit of a buzz around this film prior to release. Maybe it was because it promised to hark back to the ultra-violent action films of the late 80s/early 90s. Maybe this film would be more of a Die Hard than A Good Day to Die Hard was. Maybe Gerard Butler would make up for the awful romantic comedies he made. I now know that such hopes were foolish.

The comparisons to Die Hard are apt. Olympus Has Fallen sees the White House taken over by North Korean terrorists, and it’s up to one man – in this case, Secret Service agent, Mike Banning (Gerard Butler) – to save the president before the people responsible get what they want. The only thing the film gets right is the pacing. There’s nary a dull moment to be had here… but there are many, many inane ones.

Olympus Has Fallen is one of the stupidest action movies in recent memory. Every single character in this film does something idiotic at one time or another. The terrorists are stupid, the Secret Service agents are stupid, the joint chiefs are stupid and the president (Aaron Eckhart) is stupid. Mike manages to survive thanks to being the smartest of the lot (which isn’t saying much), and this was probably because, in some postmodern, meta fashion, he realised he was in a dumb action movie and decided to take matters into his own hands.

If the action were spectacular, then this all-round idiocy would be acceptable. It’s not. In fact, most of the movie is shot in semi darkness, which means WE CAN’T EVEN SEE when Mike is shooting people in the face (which he does a lot) or generally kicking arse. The handheld editing is frenzied and choppy, but you’ll never get motion sick because all you’re looking at is shadows, anyway.

“What else can go wrong?” I hear you ask. Well, plenty. The visual effects are rotten. Truly awful. The crappy CGI makes it look like a bad late 90s computer game cutscene. Then there’s Trevor Morris’ annoying score, which is all full of presidential echoey drums from the get go and never shuts the hell up. This film is a horrendous visual, aural and intellectual attack on the viewer. And it’s utterly predictable, to boot.

In case you hadn’t got the idea, I really didn’t like Olympus Has Fallen. Butler shows only the barest smidge of charisma throughout and despite never getting boring, per se, it really isn’t an entertaining film. Even the acting prowess of Eckhart and Morgan Freeman aren’t enough to save this film. Skip it.

There are actors for whom certain roles almost seem written, while for other roles they seem completely unsuited. Gerard Butler is perfectly cast for the role of dedicated Secret Service agent Mike Banning, something that simply cannot be said when reviewing some of his other recent film choices. His appearance opposite the blink-and-you’ll-miss-her-career Katherine Heigl in The Ugly Truth has to be the best example of Butler being miscast. 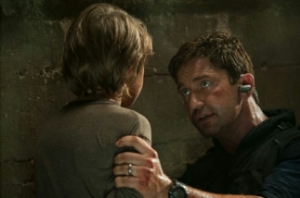 They seem closer to buddies than protector and protectee, but when tragedy strikes Asher’s family, Banning is banished from his high profile position to the benches. When a direct attack is launched on the White House – perhaps one of the most unlikely plots in the history of action films – and the entire Secret Service presence is wiped out, only one man can come to his president’s and country’s rescue.

It often seems that Hollywood films just can’t get any sillier – The Twilight Saga might have sunk as low as one dares imagine might be possible – yet Olympus Has Fallen would suggest there might not be a lower limit after all. The plot is absurd, the script littered with clangers that should have been removed at second draft stage, and the action sequences suffer from being under-lit and difficult to follow. Butler and Eckhart work hard to rise above their material to submit an acceptable action thriller for our appreciation, and somehow they seem to manage to do just that.

There are so many problems with Olympus Has Fallen that it makes little sense to dwell on them all. Suffice it to say that this is one film that won’t surprise many viewers, nor break box office records. Butler and Eckhart are charismatic enough to make the film watchable, at least, and this is high praise for the performers. Butler is almost perfect as the scorned but heroic action hero, and Eckhart tries hard despite working with his hands tied behind his back for much of the film (both literally and figuratively).

The supporting cast includes Melissa Leo, Morgan Freeman, Dylan McDermott and Angela Bassett, and none are given much more than an outline of a character. A confusing scene featuring several of these stars in the Oval Office before the shit hits the fan seems intended to provide a little bit of background to their roles, but adds little of value. The film isn’t really out to explore the nuances of Constitutional law, however, and these performers roles could have been played by people off the street at lower cost and to similar effect.

It also seems worth noting that Hollywood is fully on-board with the whole axis of evil thing, with first the remake of Red Dawn and now Olympus Has Fallen featuring North Korean bad dudes. Also, one might almost feel sorry for Rick Yune who gets to play yet another North Korean criminal mastermind. Talk about typecast.

←The Company You Keep Star Trek Into Darkness→