The penultimate film that was held back due to MGM’s financial woes (the last being Peter Jackson’s upcoming version of The Hobbit), Red Dawn remakes John Milius’ 1984 film about Communists invading mainland USA and the bunch of kids that have to fight to protect their homeland.

Lest you think that sounds ridiculous, hold on a second, because it gets even better. Whilst the original Cold War era film dealt with the threat from the USSR, this updated version decided to go with Chinese invaders. Sometime after principle photography back in 2009, however, someone realised that the Chinese market was too significant to risk offending, so it was decided that the aggressors be changed to North Koreans. This involved a lot of post-production work to alter the flags and uniforms from Chinese to North Korean, and to dub all of the attacking soldiers’ voices so that they were now speaking Korean.

This is one of those stories that are almost too good to be true, but you can witness it in the film. In fact, I was more than once distracted by the invaders’ lip movements not matching their dialogue.

Aside from the film’s bizarre history, Red Dawn has other problems on its plate. The first third feels like it’s had a lot of stuff cut out. Before we even know who our lead characters are, we’re pretty much straight into the action and they’re fighting for their lives. Narrative efficiency is all well and good, but it’s hard to care about these kids when you don’t really understand who they are. The whole thing feels like it was designed as a TV series and then altered to become a feature film. Thus, we get a season’s worth of revelations and set pieces with out the appropriate build-up or foreshadowing. Our teenagers are hiding out in the woods and then suddenly they’re back in town, kicking Commie butt, and then they’re back in the woods again. I never got a true sense of location or scale.

I could spend time complaining about lack of realism, but Red Dawn does make some attempts to half-heartedly address this. 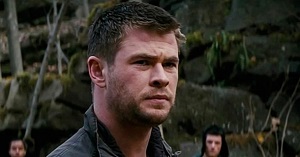 First off, Chris Hemsworth’s character plays a US marine on leave. Thus, he’s able to teach the others how to be combat ready in the 30 training montage. This is all fine except for when the characters start leaping out of windows, dropping two stories to land on concrete. Multiple compound fractures would be the appropriate conclusion to such antics, but we as the audience have to turn a blind eye to this.

That being said, the action scenes are wonderfully handled. The pacing, intensity and coverage is excellent and, for the most part, such moments made me feel like punching Communism in the face, which is I guess signifies a job well done.

The cast do all right, but I couldn’t shake the niggling feeling that there was a heap of character-rich downtime that was excised in an effort to get to the action as quickly as possible. Hemsworth is charismatic as always, whilst Josh Peck (as Matt) looks sufficiently bitter most of the time. Isabel Lucas’ Erin is given zero character depth, whilst Adrianne Palicki gets a little bit more to work with as the gutsier Toni.

I should point out that I haven’t seen the original Red Dawn. However, I grew up reading John Marsden’s ‘Tomorrow, When the War Began’, and I found the adaptation of that to be more believable and emotionally satisfying than this film, even if it had less money to throw around. Red Dawn is a mediocre action flick that will most likely fail to have any lasting impact on audiences.