I have never seen a film that immerses one so completely in the jungle. The film was entirely shot in French Guiana, and the surroundings are truly awe-inspiring. The film reeks of authenticity, and there is nothing vaguely ‘set-like’ (like you would see in something like Medicine Man). This is the jungle film. 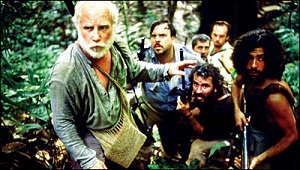 Richard Dreyfuss is fantastic. I can’t remember him being so good in a film. (Okay, so What About Bob? is a modern classic, yes. But that was Bill Murray’s film really.) This is possibly his best work since he went head to head with a big shark way back in the seventies.

Aha, of course now I am seeing the parallel! This film concerns the battle between man and beast (both literal and metaphorical) – maybe this is Richard’s forte. I’m sure he would have done better than Michael Madsen, and made The Relic the masterpiece it deserved to be. (I promise I will never mention that film again.) Most importantly, in The Old Man Who Read Love Stories, Richard has mastered the art of thinking out loud. Traditionally thinking out loud always seems tacky and unrealistic in films, but his performance simply made it seem so natural. Richard would be my contender for next year’s Best Actor Oscar, although I doubt a film like this will receive much attention in that arena.

Hugo’s performance was annoying. It seemed that everyone in the cinema felt a sense of solidarity when ‘our Hugo’ appeared. The problem was that his accent seemed kinda sketchy at best, and I felt that the camera lingered on what is essentially a secondary character too long.

This film also contained some of the best ‘darkness’ scenes ever captured on film. By this I mean that at no point were we subjected to ‘day-for-night’ blue or any other traditional tricks. At one stage the light goes out suddenly and we are left in darkness. Over the next minute or so, however the image returns ever so slightly as if our eyes were becoming accustomed to the dark. Other filmmakers should take note… it is possible to present convincing scenes in darkness.

There are quite a lot of flashbacks, which worked to a certain extent. I did feel the film went on just a bit too long as a result, and although I’m sure it was intended, it’s kinda annoying when the film’s just about at its climax and we have to sit through another flashback.

Pay no attention to the bad title and the very, very bad trailer…

The film held me spellbound.