Much like in 2006 when the best film of that year (Babel) was released on Boxing Day, so it is with No Country for Old Men which scrapes in at the last minute and heads straight to the top of the films of the year.

While hunting in the Texan prairie Llewelyn Moss (Josh Brolin) sees an injured dog in the distance, and investigating where it came from leads him to find the remains of a drug deal gone bad. Dead bodies lie everywhere, there’s a bag filled with two million dollars and a car boot full of drugs. Taking the money he unwittingly becomes the prey of Anton Chigurh (Javier Bardem), a psychopath who will do whatever it takes to retrieve the lost millions. Local Sheriff Ed Tom Bell (Tommy Lee Jones) is in turn hunting Chigurh, fearful of what will happen to Moss if Chigurh finds him and determined to catch the man responsible for so many deaths.

What follows shares the trademark bleakness of the Coen Brothers’ greatest previous film, Fargo, while also being a thriller and a western. There are shades of Frances McDormand’s Marge Gunderson in Sheriff Bell, as the Coens explore the effect that being a part of such violence has on the relatively innocent. As the voiceover at the beginning of the film suggests, Bell’s morals are those of another time, and he grows ever wearier of the drug culture that is just starting to become a problem in 1980s Texas. He is skillful but fatigued, nearing retirement, and struggling with his place in the world. Tommy Lee Jones is excellent, demonstrating much of this conflict with posture and tone, especially in the scenes shared with Moss’s wife, and also with his out of town colleague.

The standout performance, however, belongs to Javier Bardem as Chigurh. His assassin is ruthless and calculating, completely competent and absolutely horrifiying. Bardem is magnetic, drawing the viewer in with the power of his portrayal. Chigurh’s introductory scenes show him to possess a code of sorts, unfamiliar to any rational audience member, that allows him to kill without remorse and even occasionally to let luck decide who lives or dies. He is chilling and evil, and entirely believable thanks to the wonderful turn of Bardem, who is likely to win several major awards to add to the Best Supporting Actor awards already bestowed upon him by the New York Film Critics Circle and Boston Society of Film Critics.

The Coens’ use of the Texan landscape adds to the sense of bleakness that pervades the film, with windswept flatlands stripped of vegetation and quiet, beaten down small towns where poverty is the norm. Their eye for settings is matched by their ability to construct slow-building thrillers, and their skill at making surprising choices allows this film to feel fresh and inspired. Their only miscalculation is in the final scenes with Sheriff Bell, as a discussion featuring overt metaphoric references is handled in a somewhat clunky fashion.

No Country for Old Men is yet another reminder of the skill of truly great filmmakers to entertain. The Coen brothers’ film is sure to become a long-time favourite of many who see it, and is highly recommended.

The Coen Brothers’ last few efforts were decidedly poor (their segment in Paris, je t’aime being the exception). I couldn’t stand Intolerable Cruelty, and couldn’t even get through the entire of O Brother, Where Art Thou? or The Ladykillers. 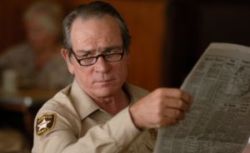 (Why would you remake that film? Why?) They have more than redeemed themselves with No Country for Old Men, however.

The film plays out as a kind of cross between Fargo and Blood Simple. As Mark said, Jones’ sheriff does have a lot in common with McDormand’s in Fargo, and the extended suspense sequences hark all the way back to their first feature. Just about the only negative point to this film is that it feels a little too cramped. The rather non-conventional storytelling technique has us following multiple characters, but we jump between them in surprising moments. Just when we connect with someone we’re taken off on an alternate path. It’s challenging and admirably handled, but does distance the viewer somewhat.

Bardem does put in one of the most memorable performances of the year, and not to undermine his acting, but his eerily neat, almost He-Man style haircut makes Anton Chigurh all the more chilling.

The film certainly pushes a fairly bleak outlook on life, like most westerns, and is definitely not the kind of story you’d go along to see for ‘fun’. Like most of the Coens’ work, there are brilliant moments of black humour, though, like Chigurh, these could become harrowingly violent at any moment. It’s hard to get too relaxed watching No Country for Old Men.

No Country for Old Men