It isn’t often a period drama (or any other major release for that matter) features the word ‘cunt’ so prominently, but Joe Wright’s adaptation of Ian McEwan’s novel breaks that and several other taboos in exploring the effect a single act of dishonesty can have on many lives.

Atonement commences with the preparations for a party at the country house shared by sisters Cecilia and Briony Tallis (Keira Knightley and Saoirse Ronan respectively). It is 1930s Britain, shortly before the outbreak of the Second World War, but the manor lifestyle of their family doesn’t allow for such concerns to creep in. Briony is a budding playwright, and a keen observer of those around her, with an eye sometimes too advanced for her 13-year-old mind to understand. Witness to a sexual act she resents due to her own childish crush, and another of forced assault involving a minor, she conjures up a version of the truth that will have lifelong repercussions.

Atonement features strong performances by its leads, in particular Ronan as the young Briony Tallis. She is vaguely disquieting in the early scenes, and plays the mixture of innocence and culpability so well the audience is left to wonder if she can really be blamed, in spite of the fact Briony seems to know full well what she is doing. This is a sure sign of talent as Briony could easily have been rendered far less sympathetically.

James McAvoy and Keira Knightley bring a believable romance to the screen that endures in spite of all they must overcome, and their coupling could readily sit alongside some of the screen’s great romantic pairings. Both provide more than capable performances, and are joined by Romola Garai as the young-adult Briony who suffers through repentance for what she has done.

The film itself is lush and appealing, with the scenes at Dunkirk worthy of special comment. The tracking shot that follows Turner and his comrades as they explore the beach is incredible, and reminds a little of those featured during the battle scenes in Children of Men. Additionally, Wright uses flash-back and -forward as well as fantasy sequences to build a not entirely linear narrative that enhances the emotion the audience feels for the characters and their plight.

Atonement isn’t perfect, but due to the performance of its leads – particularly Ronan in the crucial early sequences – it resides comfortably among the better period drama and war films. For those wishing for something more from their Boxing Day viewing, this would be a good choice.

Enduring Love was a terribly underrated film. On the surface it was a simple psychological thriller but it possessed an unusual emotional and cinematic depth. Atonement, also based on an Ian McEwan novel, is on the other hand presented as a sweeping, epic romance, but is in actual fact a lot more focussed. 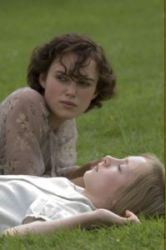 James McAvoy and Keira Knightley are in top form here, but Mark is right in that Saoirse Ronan steals the show as the young Briony. Equal parts innocent and conniving at the mere age of 13, her behaviour is the catalyst for the dramatic events that follow. The ever so slight time shifting that goes on is wonderful, and once again it’s the inherent simplicity in the chaos that ensues that is so engaging.

The film surprises on a few levels, and is beautifully constructed. The score in particular stands out – surely one of the best of the year. Dario Marianelli’s music uses the tapping of Briony’s typewriter to great effect, infusing the early scenes in particular with a sinister sense of urgency.

Atonement’s major let down is the rather slow middle section. I’m not the biggest fan of war movies, so this could explain my reaction, but I found these scenes tedious and frustrating. Sure, the mega tracking shot is pretty, and well orchestrated, but it doesn’t advance the plot in the same way that similar techniques in Children of Men did.

The final section of the story does pick up again, but it never quite reaches the heights of the beginning. It’s certainly a strong film, but not the masterpiece that I’d hoped for.

←No Country for Old Men Halloween→