Mona Lisa Smile features the cream of Hollywood young female acting talent, or so it seems, and yet it struggles to match its predecessor Dead Poet’s Society for depth, emotion or class. Ok, so maybe comparing it to Dead Poet’s is a bit mean… This was never a rip-off was it?? Progressive young teacher moves into an extremely traditional preparatory school in the 1950s, finds their ways a little backward, encourages the students to think for themselves, (with negative consequences), and then ends up leaving after one influential year they will never forget. Hmmm, what am I thinking? It’s the exact same film people! I know I’m not the first to say this, and shouldn’t be the last, but why not remake a classic, change the genders, and set it 5 years before its inspiration! That’ll trick them into thinking its a new and original idea. Why, oh why? There’s even an ‘Oh, Captain, my Captain!’ moment, ffs.

Maggie Gyllenhaal and Julia Stiles are only passable, disappointing for actors of their class, and Roberts and Dunst – well, they try hard but fail to inspire. Roberts is not Robin Williams. Dunst is not Robert Sean Leonard, or Ethan Hawke. Maybe that’s the problem? I can only relate to male stories? Nah, my moment of self-doubt has passed, and I know the problem with this film was not its audience.

Whilst trotting out some cliches of boarding school life and trying to move us with the story of what one woman learns from her students when she thinks she’s actually the teacher may impress some people, I’m not one of them. 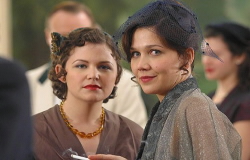 That’s not to say that it wasn’t entertaining, however. Mona Lisa Smile has an incredible cast, even if none of them were stretched anywhere near their full potential. Just about everyone is pretending that they’re much younger than they are, and Maggie Gyllenhaal is probably the least convincing, looking way older than she should. But this is the way it goes, so I have to ensure that my suspension of disbelief is well serviced. Julia Roberts is fine, and (generally speaking) plays the same character she always does. Confessions Of A Dangerous Mind was probably the only film I’ve seen her in where she surprised me. As one of Hollywood’s highest paid female stars you’d think she’d be able to take a few risks, but apparently not. (Or to be fair maybe there are no studios willing to take the risks, therefore she gets stuck with such ho-hum roles. But then again maybe she should consider a pay cut in order to star in something cutting edge. (Don’t mind me, I’ll just sit here at my computer telling her what to do – writing for this website provides me with the illusion that what I say actually matters… God(s) bless the internet!)).

This film falls a little flat towards the end – we’re expected to feel for the characters as much as those in Dead Poet’s Society, but unfortunately we don’t. Mona Lisa Smile is apparently an ode to how far society has come. How women’s rights has progressed over the years, and how much harder it was ‘back then’. If nothing else, it seems to be saying ‘hey, back in the day things were pretty bad, so you should be thankful’.

But there is a deceit here. 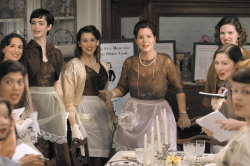 Mona Lisa Smile is filled with top-notch female actresses – the best Hollywood has to offer, effectively. And yet (without doing any actual research) one can be pretty certain that Roberts, Dunst, Stiles et al were paid nowhere near as much money as any male actors of the same rank would be. No matter how much a film like Mona Lisa Smile tells us that women used to have it rough, it’s important to realise that they still do. We don’t have equality of the sexes – equal pay for equal work, equal rights, or, at a more subliminal level – equal standards. There are entire professions that are underpaid basically for no reason other that they are (or used to be) dominated by women. Nursing and teaching spring to mind particularly. And yet, we have a film that not only states that women should be treated equally, but that teachers are incredibly important in shaping children into open-minded and progressive people who can think for themselves.

I know I’m not the first person to point out a double standard in Hollywood, but I was particularly angry with Mona Lisa Smile.

We are living in very conservative times. Times when our leaders would quite like to see a reversion to even more conservative times. The people who hold power aren’t exactly progressive thinkers. Maternity and paternity leave, single parent assistance (and even abortion rights in the US) are nowhere near as much as they should be.

Women do not have equal rights, and I think that Mona Lisa Smile is in effect saying (however subliminally) that they do.

Enjoy Mona Lisa Smile as a piece of well-crafted entertainment. Don’t expect to be challenged. And above all don’t let it dull your attitudes into complacency by thinking that ‘we have come so far’. There’s a long way to go.