Geez… get over it, Mark! For y’all out there who thought the original Matrix was such a groundbreaking and revolutionary moment in film making: IT WASN’T. In fact the first time I saw The Matrix, I was bored for a decent portion of the film. IT WAS AN ACTION MOVIE. An action movie, and not much more. The concepts weren’t really as ‘out there’ as many people seemed to think. Maybe it’s just that science fiction hadn’t really made it into the mainstream until this film (excepting maybe Star Wars), but it seemed that everyone had their minds blown by this film. I for one was much more impressed with Dark City when it came out a couple of years earlier. 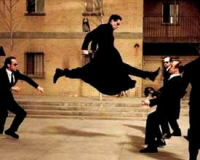 Yes, the special effects in The Matrix were great… not perfect… but great… and the scenarios built up around the action scenes were great also. But, come on! Some of that dialogue! Some of that acting! Whenever Morpheus opened his mouth to say something like ‘what is reality?’ didn’t anyone else think that he was an absolute wanker???

I did enjoy that film on a repeat viewing. (Actually on the second repeat viewing… on the first repeat viewing I fell asleep.) And there are moments that will forever be remembered as ‘classic’ movie scenes, sure. But all the same I was never as impressed as everyone else.

Thus when the first sequel came out I wasn’t really too disappointed. Oh, the first hour was shitboring, but then again in the first film I never liked the scenes that took place in ‘the real world’. Then it started looking a bit like Episode 1, what with all the council sitting around talking. Please! We’ve already got 5 (and soon 6) Star Wars movies… that’s enough! 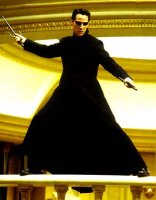 But then they got their action thang on, and it was great. I thought the freeway scene was an absolute ripper, as was the huge fight around the staircase. I thought the last act of this film was edge-of-your-seat stuff.

Once again, any time somebody spoke it simply seemed like an exercise in self-gratification, but for the most part the great action outweighed this. Okay, so they did leave themselves in a sticky situation – Neo is basically omnipotent… how can there be any tension? After all, very few films are made about gods. But they got round that with some very shoddy excuses… and that was fine.

Basically anybody who simply enjoyed the original film (ie. didn’t have an epiphany after seeing it), is bound to like Reloaded. It’s a grand scale action movie… and it pays to not forget that fact.