Dakota Johnson effortlessly breezes through How to Be Single on her charisma alone. The film itself, however, isn’t quite up to the challenge. 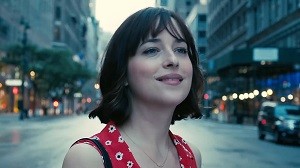 We open with Alice (Johnson) stating that she wants a break from her boyfriend. Deciding that she’s never really struck out on her own, going from her parents’ house to a dorm to living with him, she needs time to find herself before she knows that they truly deserve to be together. So: new job, new best friend, Robin (Rebel Wilson), new apartment in New York City. What follows is a story about the many varying forms of relationship out there, whether that be of her sister, Meg (Leslie Mann), who is steadfastly single and not interested in kids, or bar owner Tom (Anders Holm), who loves women but doesn’t like the idea of settling for just one.

Going into this film was like walking into a minefield. Was this going to be the type of romcom that has progressive pretentions but then ends up with a very traditional happily ever after? The script itself literally points out the flaws of Bridget Jones’s Diary and ‘Sex and the City’ – stories ostensibly about women finding their place in the world, yet primarily concerned with hunting down the one man that will complete them.

At the end of the day, How to Be Single doesn’t settle for an oh-so-traditional conclusion. It seems to be stating that there are many kinds of relationship situations – including being single – and no one dynamic is the ‘correct’ one. That being said, Alice’s journey is all over the place. The problem is that she starts out with a very clearly stated mission, then spends most of the movie failing at it. Which would be fine if the movie were suggesting her premise was flawed. But it’s not. The film seems to be saying that she had the right idea, but was just a bit rubbish at achieving her goal.

That being said, this is a very well-crafted film. The cinematography and art design is sublime – something you don’t often see in romcoms – and it moves along as a brisk pace. It’s also unpredictable. On half a dozen occasions, the film truly surprised me. In this sense, it’s a refreshing little tale.

Johnson is the true star, and I can imagine that the film wouldn’t have worked as well with a lesser performer front and centre. Wilson actually doesn’t appear that much – if you’ve seen the trailer, you’ve seen practically all her lines – whilst Leslie Mann, Jake Lacy and Anders Holm are great supporting players. Alison Brie is present also in a very strange role, one that has little to do with the rest of the film. If someone said her part was added late in the day through reshoots, I’d believe them. In fact, it’s like her and Jason Mantzoukas were in the studio next door filming Sleeping With Other People, so just popped over for a couple of scenes.  Perhaps the character of Lucy was more important in the novel, but here she’s nothing more than an interesting diversion.

How to Be Single isn’t offensive in its approach, it’s just that the moral of the story isn’t entirely clear. If you’re looking for an entertaining and light-hearted journey through myriad labyrinthine relationships, however, it certainly gets the job done.

How to Be Single