Leslye Headland’s new film is an almost-brilliant romcom that makes some crucial missteps along the way. 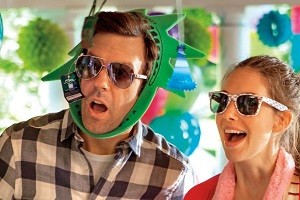 Alison Brie and Jason Sudeikis headline this surprisingly affecting romance about two commitment-phobes who find themselves falling for each other despite their best intentions. Both Lainey (Brie) and Jake (Sudeikis) have had a really hard time with fidelity in their respective relationships. The two of them haven’t seen each other since college, but when they cross paths at a local sex addiction support group, a friendship forms. Together they decide to become friends in a purely platonic sense.

We’ve seen this kind of film before, sure. When Harry Met Sally springs to mind (there’s even a scene where Jake proclaims that women have never faked orgasms in his presence) but there is a depth to the characters here that surprises. Like ‘Dawson’s Creek’, the central characters in Sleeping With Other People seem way too self-aware to be realistic, but it’s always nice to see some flawed yet likable people onscreen. Even the supporting players, such as Amanda Peet’s Paula, get quality characterisation.

Leslye Headland’s direction is spot on, and in many cases raises the bar far higher than the material should allow. Some of the best scenes are quiet moments with Jake and Lainey having a heart to heart – no punch lines, no over-the-top schmalz, just wonderfully heartfelt performances.

The comedy, however, is present and accounted for. I laughed my head off throughout the feature, and unsurprisingly, it’s the ever-so-common Best Friend Characters that get the funniest lines. In this case, it’s Jason Mantzoukas’ Xander and his wife Naomi (Andrea Savage) that steal some of the film’s best jokes. Adams Brody and Scott have small yet significant roles whilst Natasha Lyonne – criminally – only gets two scenes.

At the end of the day, I wanted our two leads to get together, so I guess that’s a sign of a good romcom. Sudeikis and Brie have excellent chemistry, and Headland’s direction works wonders. The film might be uneven but I for one loved it.

Sleeping With Other People is released in Australia on 29 October 2015.

Sleeping With Other People